Android vs. iOS: Which App Should You Develop First for Your Business?

Author:  Michael GeorgiouOctober 16th, 2020
Mobile App Development
Home>Blog>Android vs. iOS: Which App Should You Develop First for Your Business? 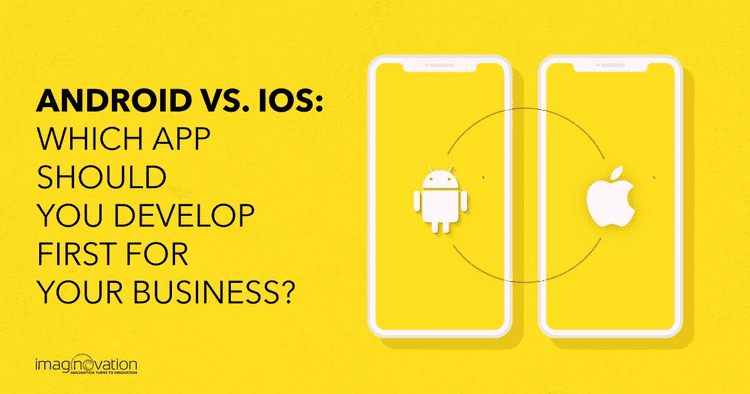 Developing the first mobile app for your business can be an exciting endeavor.

Google Android and Apple iOS are two of the most popular choices for mobile app development. According to the latest report published by Statista, both the operating systems possess 99 percent of the total global market share.

So, how do you choose between Android and iOS?

Google Android leads the mobile operating systems worldwide with a market share of 74.6 percent – this makes it an obvious choice. But, Apple iOS seems more lucrative when looking at the high monetization prospects it offers.

Let’s discuss the differences between iOS and Android. We will evaluate the pros and cons of choosing either OS. By the end of the post, you will know which OS is a better fit for your first project. 1. What Does Market Insights Say?

The market insights tell us that while there are more android smartphone users and more number of android apps available, the iOS apps fare better in terms of monetization.

Let’s have a look.

A Statista report published in August 2020 tells us there are more than three billion smartphone users in the world today. The United States is one of the three leading countries globally with respect to the number of smartphone users.

By the second quarter of 2020, it is found that Google play store offered the maximum no. of apps for the Android users touching a figure of 2.7 million apps.

In comparison, Apple’s App Store was the second-largest app store with 1.82 million available apps for iOS.

Android apps always perform better when it comes to a comparison of the number of app downloads.

iOS fares better in terms of revenue as compared to Android apps. Apple’s App Store generated $32.8 billion globally from in-app purchases, subscriptions, and premium apps during the first half of 2020.

This was near twice the estimated gross revenue on Google Play, which touched $17.3 billion.

2. How Complex is App Development?

Let’s check the various advantages and disadvantages of Android and iOS app development.

Talking only about the app development cost right now – the difference in development cost between an iOS app and an Android app is not easy to estimate because there are various factors one needs to consider.

These factors range from:

(Check out our detailed blog to know more about the mobile app development costs.)

While the Android apps might have a higher development cost because of the long development time, the Android Studio application that is used for app development can be installed on any standard PC, which does not usually incur an additional cost.

On the other hand, iOS apps are developed using Xcode, which works only on the Mac. This can be an additional cost because the investment in buying a Mac, as well as an iPhone or iPad can significantly add to the cost of development. Otherwise, the development time is lesser. Therefore it leads to less time and cost for development and testing.

You can download Android apps from multiple sources – the Google Play Store and some other websites too. There is a large number of Android devices available in the market. Hence, the testing process usually takes longer.

The complexity of the testing process can also increase because of the availability of a large number of Android devices by different manufacturers – that have varying design and functionalities.

iOS apps are available for download from a single source only – Apple’s App Store. Testing an iOS app would take relatively less time, as there is a significantly less number of iOS devices.

iOS apps may seem faster to design, but Apple has a strict and lengthy app approval process before it publishes any new app to the store. A fee of $99 is paid annually to the Apple app store to publish the app.

It is relatively easier to upload Android apps on the Google Play Store. A one-time registration fee of $25 must be paid for it.

Talking about the apps’ updates and modifications – It takes longer for making modifications and updates on an iOS app as every change needs to go through the long and stringent approval process.

On Android, once published, the app is available on the store within a few hours, and one can perform beta testing or update the app easily and quickly.

Making money is an essential purpose of any mobile application.

Your mobile apps can help you make money by:

Let’s take a look at how both OS fare in these aspects.

Are you going to charge your users for downloading the app?

If yes, then go in for the iOS app first.

As per a September 2020 report published by Statista, 3.5% of the Android apps on Google play store are paid in comparison to 7.7% of the iOS on the Apple App Store. So, if you plan to charge your users for downloads, the Apple App Store is the place to do it. That’s because iOS users are accustomed to seeing more paid apps and less free apps when searching for apps to download.

Whereas Android users usually do not see as many apps that require payment to download. So, if they see your paid app, they might consider finding another one with similar functions and is free.

Please remember that if you plan to charge Apple users for downloading your app, it can be an expensive strategy. You will have a much higher customer acquisition price than if you offer your app for free.

Your users will be much more engaged. If they’re willing to pay for it, that means they probably won’t abandon it.

Android must be considered if you plan to make use of advertisements and in-app purchases for monetization.

This can generate less money per purchase, but since android users dominate the market, it’ll be many users per purchase.

Android users are not as engaged since they’re not investing anything into the download.

For Android apps, data privacy & security can be an issue. The controls on app access to user’s data are not as strict as on the iOS app.

iOS is the most secure platform and, thus, best protects user privacy.

App customization is more difficult in iOS than in Android apps.

What Should You Choose as Your First App– Android or iOS?

You can also choose a hybrid app solution for your business.

Hybrid development allows you to develop on both OS at the same time.

Turn Your Ideas into Successful Digital Reality with Imaginovation

Remember, both iOS and Android OS are popular mobile app platforms. What you must choose for your business largely depends on your requirement, budget, and preferences.

Do get in touch with us to discuss your project requirements. We will help you select the right option for your business.

We are an award-winning web and mobile app development agency with a vast experience in crafting remarkable digital success stories for diverse companies. Let’s talk.

What Should You Choose as Your First App– Android or iOS?

Turn Your Ideas into Successful Digital Reality with Imaginovation

1. Android vs. iOS: Which one Should You Develop First for Your Business?