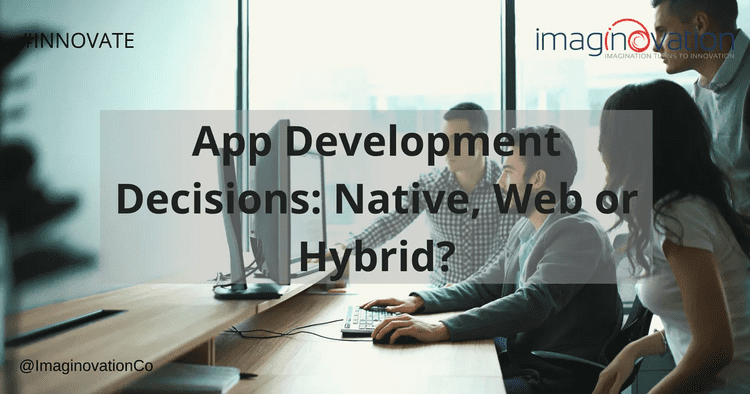 Developing a mobile app for your company, product, or service is a useful way to stay top of mind with your customers. Once you’ve decided to build a mobile app, you have a lot of decisions to make about it, including [five we’ve outlined in a previous post](https://www.imaginovation.net/blog/5-decisions-to-make-before-developing-a-mobile-app/).

One of the decisions that often holds people up at the start is whether to build a native app, a web app, or a hybrid app. Although we discussed this in the prior post a little bit, the debate warrants plenty of thought and more detail.

Web App – A web app is run like a website. Users won’t download this app to their phone or device. Instead, they will log in on their internet browser. So how is a website different from a web app? After all, if someone is going to a browser and typing in a URL, isn’t it just the same?

Well, sort of. The difference boils down to functionality. A website offers information to visitors. Even if that website has a contact form that you fill out, it’s still a website. A web application offers interaction of some kind. One easy example of this is a restaurant website. You might visit the website to learn the hours, check the phone number, or view the menu. Part of the website turns into a web application if the user has some control and interaction. For example, national restaurant chains offer options such as making a reservation, viewing the local menu and prices, buying a gift card, or ordering food online.

Some examples of web apps include the finance tool Mint, the email marketing program Mailchimp, and Squarespace, which enables users to create websites.

![Web application example](/img/6753-Mint-1024x383.webp)
**Native App** – A native app is one built specifically for the platform it will serve. These apps might come pre-installed on your smartphone or tablet, or you can find them in the app store you use (e.g., GooglePlay or Apple’s App Store). Android and Apple (iOS) systems work differently, and a native app is built and coded specifically for the operating system on which you want it to work. An app developed for Android won’t work on an iOS device. The iPhone’s camera is a native app So is Instagram, which operates within the app on your device — even though Instagram has versions on both platforms.
![Native app example](/img/6753-Itunes-1024x517.webp)
**Hybrid App** – A hybrid app is a little of native, a bit of web app. Hybrid apps are hosted inside a native application, but use something called a wrapper so they can be used on different platforms. Unlike web apps, a hybrid has access to the device itself, relying on the camera, your contact list, or other features.

What truly separates these types of apps is how they are built behind the scenes. Unless you are a coder, you probably don’t care. However, there are some advantages to each of these apps, as well as drawbacks:

Which is Right for You?

The end customer doesn’t care which way the app is built as long as it works well. That means this decision hangs mostly on how the user will approach your app. Is he/she more likely to use it on a phone or a laptop? Do you need some of the functions offered by a phone (such as a camera)? Contact us to brainstorm your new application.

Which is Right for You?