Applications of AR and VR [Explained with Examples] 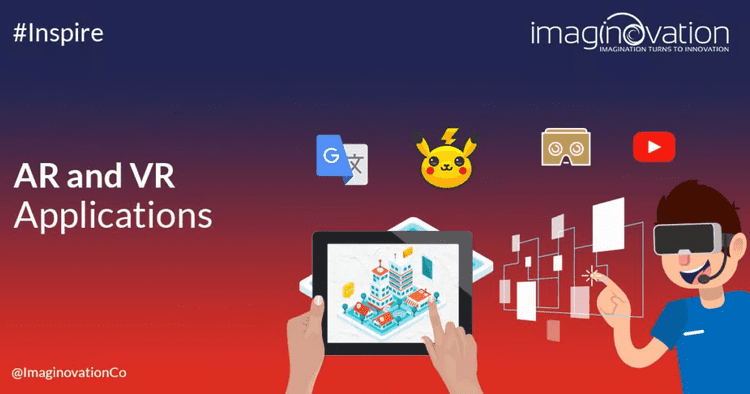 Technology is advancing and modernizing at an accelerated rate. What we used to think of as pure fiction is turning into reality every day. It seems like it was only yesterday that we were thinking about the possibility of being able to see, feel and experience distant parts of the world without being physically present ourselves. The whole concept seems like some kind of unnatural phenomena or an unreal super power at first, but as it turns out those realities have come sooner than we could ever have imagined with the advent of augmented reality and virtual reality applications.

Augmented Reality, AR for short, is a live view of the world. The difference between this live view and a live video is that this live view is complemented with computerized data in the form of an audio, a video or even a static graphic image to make the experience much more realistic for the user. This allows the user to enhance and change his perception of the reality.

With the fast pace at which the world is advancing, Augmented Reality has made a deep connection with apps for handheld devices such as smart phones, for tablets, and even for desktop computers and laptops. Each new augmented reality application guarantees that it will enhance the user’s perception of reality, making the experience much more interactive and engaging.

How does an Augmented Reality application help the user? Imagine yourself at a clothing store having to try on each and every new outfit. Now imagine yourself having a smartphone app that augments the clothes that you want to try without having to try each one on physically. Or imagine a smartphone app that allows you to follow directions in real time as you walk around an unfamiliar city, with directional arrows to show you the way. These are the realities of augmented reality.

Virtual Reality, VR for short, is a simulation of the user’s physical presence in the real or a computer-generated world. This simulation creates a 360° environment. This technology normally makes use of a wearable headset, combined with a built-in screen.

This allows the user to envision herself as being physically present in a virtual location. This technology also makes use of computer generated audio, video and even static graphical images to make the experience much more realistic for the user.

Those ubiquitous headsets that interface with smartphones are one common example, though VR can go much further with treadmills for movement, seated experiences and more. You probably have already experienced virtual reality at a theme park!

Rather than just downloading a movie on a tablet, imagine yourself being present virtually at a movie theatre and having your movie being played on the big screen. Movie attendance is already down, but people consistently report that they love the experience.

You could still munch your popcorn without the loud talkers behind you or the high ticket prices. VR concepts are also being deployed in newly developed games allowing users to be present virtually inside of their favorite games and act as the character themselves, controlling their own movements via remote controls.

VR headsets that interact with smartphones were the hot ticket in the most recent holiday season, with hundreds of apps hitting the market to offer immersive experiences.

There are numerous applications being developed under the concepts of VR. Here are a few of the top VR apps:

As you’ve probably guessed by now, Virtual Reality and Augmented Reality are huge platforms with an immense marketplace. Although still in development, both VR and AR are expected to be huge money makers.

VR and AR are the future of the marketplace, and expect businesses to innovate further in how to make money more effectively through these new forms of media. If you haven’t tried them yourself just yet, then what are you waiting for? Pick up your smartphone and step into the future, and you’ll understand where the future is going in app development.

Do you have an idea for the next big AR or VR mobile app? Contact us. We’d love to help your vision become ACTUAL reality!