How Gaming Companies Can Benefit From Blockchain Technology 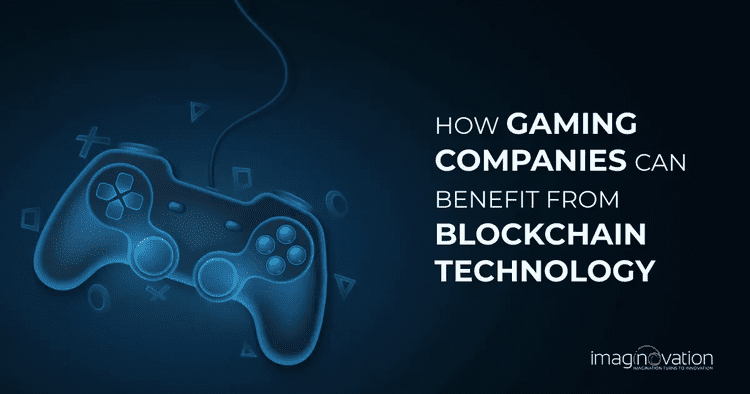 With more than 2 billion gamers across the globe, gaming is turning out to be a compelling use case for blockchain.

Integration with cryptocurrencies and unique, non-fungible tokens (NFTs) has revolutionized the blockchain, bringing endless possibilities to this multi-million dollar industry.

And, unlike most online games based on a centralized model, blockchain follows a decentralized structure, making its ecosystem almost borderless and transparent.

No wonder blockchain gaming is attracting millions of gamers and investors globally.

In this blog, we present an easy-to-understand overview of blockchain in gaming, look at some of its uses and examples, and the key challenges one might face in blockchain gaming.

Blockchain in Gaming: An Overview

A blockchain is a chain of data blocks on a network. The best thing about it is that it can neither be altered nor relocated. And it remains transparent to everyone. This structure offers a great way to preserve a complete record of things that transpired on the network.

From a zero-value market sometime back, blockchain gaming reached 3 billion USD in 2021. This figure is expected to rise to 39.7 billion USD by 2025.

The amalgamation of the two worlds of blockchain and gaming has created ample opportunities for the gaming industry.

So, as soon as a gamer earns an NFT reward, they gain complete ownership of these assets, which can be traded and sold in and outside the games.

A survey by the Blockchain Game Alliance (BGA) group in September 2021 reveals that 85% of the survey respondents said asset ownership is the most prominent advantage of blockchain games. This is in stark contrast to the traditional centralized gaming model that strictly prohibits any sale of in-game assets in external markets.

As per this survey, new revenue models (74%) and player reward models (71%) ranked second and third on the list of key benefits of blockchain gaming. Unlike the traditional games, which are highly centralized, making the game developers control all assets and currency, blockchain games are decentralized. It means that the game is not owned or controlled by any central authority but rather by anyone who possesses digital assets and game objects (players, in this case).

How Blockchain is Transforming the Gaming Industry

However, blockchain resolves many of these problems. Here’s how this is happening.

Moreover, hackers won’t be able to destroy a decentralized blockchain network because there is no single server to beat here. Blockchain networks use ’Proof of Work’ (POW) or other consensus algorithms to keep the network secure. So, hackers can’t delete or alter an existing network’s transaction history in the blockchain.

As an entrepreneur or game developer, you get a secure environment when you build your game on the blockchain.

The gaming industry is accessible across the world. Players from different countries play games with each other.

In a typical online game, players have to pay expensive fees to utilize online gaming. Moreover, although players can leverage fiat currencies, the transactions are not cost-effective.

Also, a solution on how they would transfer their assets without taking days for payment processing was needed. Blockchain enables instant payments across the world - without any restrictions.

With Blockchain, gamers can do away with their debit or credit cards. No matter how big or small a payment is, blockchain offers a decentralized method. There is no way a scammer can steal information and manipulate transactions.

The gaming industry bears the maximum brunt of online fraud. Hackers are getting more competent at exploiting technical vulnerabilities. Hence, the industry constantly seeks techniques that can save revenues.

Blockchain can eradicate all the chances of fraud and save billions.

If you build a blockchain game, code your smart contracts well. Also, a completely open ledger of all transactions helps prevent fraud in blockchain gaming.

4. Players Get to Own The In-game Assets Truly Unlike the scenario in non-blockchain games where you do not own your in-game purchases, a key benefit of blockchain gaming is that players own their assets. The blockchain-based game uses smart contracts to govern transactions, making all the difference.

Smart contracts are executed automatically as soon as the conditions coded in them are fulfilled, and the result is irreversible. Therefore, all in-game assets bought by the smart contracts players are transferred to their public addresses. Smart contracts enable complete transparency, and every player can view the rules.

The decentralized blockchain records smart contract execution results that are immutable. No centralized agent can alter the public address where the assets are stored. So, no one can modify the ownership of any in-game assets.

Ask a hacker, and they’d say they love centralized servers!

It's because they are easily hacked, just a single stationary target for them. And, once they break through the encryption, all the assets stored there can be theirs.

Blockchain technology, however, can change that. Players can store the collectibles securely in their crypto wallets when they purchase digital collectibles in blockchain-based games.

For example, if you visit the Enjin Coin website, you will notice an Enjin wallet for players, where they can store Bitcoin and Ether and secure their in-game assets.

6. Cut Down The Price of Gaming Assets

The higher price of gaming items can limit the customer base for game developers. Price is a big reason gamers look for stolen game items in the digital market.

However, blockchain brings the benefit of affordable micro-transactions. This enables developers to sell their power-ups at low prices without losing profits. Moreover, users can control how much they are willing to spend when playing online games.

Critical Challenges of Blockchain in Gaming While there is a global surge in the adoption of blockchain games, their growth trajectory is impeded by several challenges. Many of these challenges weren't anticipated earlier, but with advancements in tech, there is hope.

A few of the key challenges include:

There is a general lack of awareness about blockchain and NFT technologies. While people might have heard of these technologies, they consider them more of buzzwords. As a result, blockchain-based games and their unique benefits do not get the kind the attention they deserve.

As a game becomes popular and evolves, it must continue scaling along. However, blockchain gaming systems find maintaining the additional load of transactions and scaling with demand quite challenging.

Blockchain-based transactions are expensive and sometimes cost dollars per transaction. Even the simplest blockchain games with minimal interactions can be costly because of this reason.

For example, if the gamer pays a single cent for every move they make, they will still spend a lot of money.

The regulatory framework surrounding cryptocurrencies and NFTs sometimes discourage gamers and developers from exploring blockchain games to their full potential.

Blockchain-based crypto games and collectibles present some legal risks. However, you may fall into avoidable legal pitfalls without knowledge of the relevant issues and careful structuring.

Onboarding mainstream gamers into a blockchain game is certainly not a smooth process.

A player must perform many unique steps, such as downloading the Metamask Chrome extension wallet, generating an address, and signing up with an exchange.

A crypto-savvy user will be okay doing all this, but this can be too complex for an average mainstream gamer.

Compared to traditional gaming, blockchain-based gaming is still very much a niche. But there are hundreds of blockchain games already on the market.

Let’s discuss a few popular ones: CryptoKitties, launched In November 2017, is one of the first blockchain-based games. It has become a rage and is one of the most popular games built on Ethereum.

It is a trendy, play-to-earn game that lets you create a new generation of cats (digital, of course) with unique traits to maximize their value.

The one-of-a-kind aspect makes the Cryptokitties NFT kitty a sort of digital scarcity that you cannot replicate or even destroy. It means that if you are a valid cryptokitty owner, no one else will be able to claim or take it away unless you sell it.

Many Cryptokitties players have earned large sums of money by selling their in-game kittens.

Upland is a property-trading metaverse game. Upland players purchase, sell, trade, and build virtual properties based on real-world addresses. Upland has mapped San Francisco and New York cities for this.

By becoming a "digital landlord" at Upland, you can build properties and earn UPX coins.

Upland users can easily purchase digital assets within the game with fiat or cryptocurrency (UPX coin) and even trade the game assets with other gamers.

The game recently implemented the beta version for its Property-to-USD program that will let the players sell properties for some real money. Gods Unchained is another blockchain-based game that uses Ethereum.

It is a fantasy trading game that offers many play-to-earn opportunities to its gamers. Players find this game easy to start, and it requires no monetary investment to begin.

In this game, two players face off in an arena to ascertain who is more powerful. They can choose Nature, Light, Death, War, Deception, or Magic to decrease their opponent’s god’s health to nil.

Mobox is an exciting gaming metaverse that combines yield farming and farming NFTs. It presents a free-to-play and play-to-earn option to its players. It is a great platform that smartly combines gaming with decentralized finance (DeFi) and operates on the Binance Smart Chain.

The essential purpose of this game is to allow everyone to participate in NFT games freely and earn money by playing. Players here use MBOX tokens.

The Mobox developers used this approach to bring gaming closer to GameFi as a platform - making the players and investors access games from separate blockchains in one place.

If you have been playing online games and know about different gamings available, Cryptopop may seem familiar to you. And indeed, Cryptopop takes inspiration from another trendy game, Candy Crush.

Players here can match the symbols of cryptocurrencies appearing on the screen and earn points. The more matches, the greater the number of points earned. Targets for the players change as the game progresses and levels are unlocked.

In addition, players make more money from the in-game market, where they can trade with other players. Cryptopop uses Ether and Popcorn as its main currencies.

We can say without a doubt that the blockchain has tremendous power to reshape the architecture of all industries, including gaming. In addition, blockchain creates many new opportunities and business models that are transparent and digitally persistent.

With a steady surge in the number of users every year, the demand for blockchain-enabled solutions is rising.

If you wish to get on this journey of building a customized blockchain app, talk to us. We will help you build a blockchain solution for your business.

Blockchain in Gaming: An Overview

How Blockchain is Transforming the Gaming Industry

Critical Challenges of Blockchain in Gaming