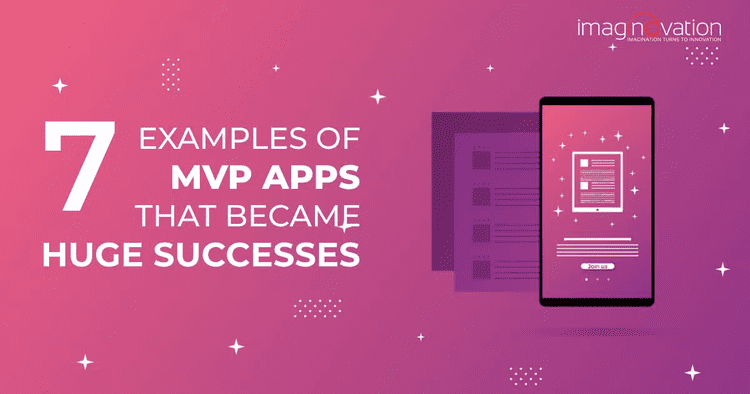 It’s a great feeling when you have a brilliant business idea. You can’t wait to transform your idea into a marketable product and start making money.

But you’re hesitant to invest thousands of dollars and a lot of time building something new, only to realize later that this new product doesn’t have a public appeal.

Does that mean that you discard your business idea?

No, An MVP is the answer to your dilemma.

What is an MVP?

An MVP (Minimum Viable Product) is a lot more than just a minimum product. It is all about selling an idea you haven’t yet built.

We can say, an MVP is an initial version of a product with just enough features that make it usable by early customers who can then provide the necessary feedback for future product enhancement and development.

Not only is an MVP financially viable, but the companies can also avoid wasting precious time, effort, and money with an MVP. Click To Tweet### Characteristics of an MVP App

You can sum-up an MVP app with the following characteristics:

Launching an MVP app can be a strategic move by the companies.

Let’s go through some examples of MVPs.

Examples of MVPs That Became a Huge Success

When we look at some of the super successful apps like Facebook, Amazon, Uber, Airbnb, and the likes, we assume that their success was inevitable. But the initial development phase for these products is hugely different from what they are today.

They all developed an MVP for their users, validated their assumptions, underwent an iterative process of significant changes, and ended up being huge successes that they are today.

The amazing thing about an MVP approach is that it works well for every industry.

Let’s talk about some of the best examples of MVPs and see what we can learn from each of them. The story of Facebook began in the year 2004. Back then, Facebook was known as Thefacebook, and it lacked many services and features included in today’s Facebook.

Along with his group of friends, Mark Zuckerberg had created Thefacebook as an innovative social media platform for connecting Harvard students through an online community.

As its popularity grew, it added few more American universities, including Columbia, Stanford, and Yale. This expansion continued throughout 2005 and included universities and schools from some other counties as well.

This was when Thefacebook became just Facebook, after purchasing the domain facebook.com for $200,000. By September 2006, Facebook opened its services to everyone with a valid email id with an age requirement of 13 and older. And in no time, the company became a global phenomenon.

Although Facebook was a latecomer to the world of social media, it succeeded fabulously. Let’s take a look at some vital stats:

While the original story of how Facebook started doesn’t begin like any other MVP tales, it developed into an MVP along the way. Coupled with a unique idea and some smart business moves, Facebook has become a successful app today.

Here are some of the MVP elements: Frustrated by the high price of cabs and lack of affordable alternatives, Uber was founded by two friends Garrett Camp and Travis Kalanick, in 2009 as Ubercab.

It started as a simplified mobile interface only used by the founders and their friends. Its services were first tested in New York with the release of a simple iOS app and only three cars in 2010, and then it was formally launched in San Francisco after that. In 2011, the company changed its name to Uber.

To gather user feedback, the founders’ used rates and comments on the AppStore. This was when they implemented an in-app payment option, which became one of Uber’s greatest competitive advantages. After this app was adjusted to users’ suggestions, a full-scale app was launched by Uber.

Let’s take a look at some critical Uber stats:

Uber MVP was widely accepted by its users because of a number of reasons: In 2007, two product designers, Brian Chesky and Joe Gebbia, who had moved to San Francisco, faced a problem – they couldn’t afford to pay their rent.

And they also observed that San Francisco frequently hosted highly attended conferences, but visitors usually found it difficult to look for a city hotel room. The duo figured they had some extra space in their apartment, which was enough to fit a few air mattresses.

They thought a few people would be willing to pay to stay with a few strangers, and they, in turn, will make some extra bucks.

So, they decided to test this in the easiest manner possible – They provided air mattresses in their living room, free Wi-Fi, and free breakfast. They got an idea for a new business after many people showed interest in renting space in his apartment.

So, they created a website called “Air Bed & Breakfast.” And soon, it spread far beyond the original San Francisco test area. Dropbox, an Internet hosting service, allows users to store their files in the cloud. Back in 2007, the idea for Dropbox was conceived by a University student Drew Houston because he kept forgetting his USB memory stick.

He originally built a solution for himself but soon realized that others could also benefit from it. To validate his idea, he made a 3 minutes long explainer video that showed Dropbox’s intended functionality, which demonstrated how it would help them, and eventually leading to why they would want to pay for it.

This increased user signups from 5,000 people to 75,000 overnight — all of this without even a real product Spotify is a popular name in the music industry today. Like other success stories, this one also began with an MVP product.

It started in 2006 in Sweden, when the founders identified an opportunity that the music industry can have a product for music lovers by which they can stream songs. Their first prototype Spotify AB was ready in just four months. Today, it has 138 million premium subscribers worldwide. Instacart operates a grocery pick-up and delivery service. Apoorva Mehta founded it in 2012. The founder was aware that there was a demand for the product in the market, but he did not have the right resources and the necessary infrastructure to get the operations running.

The business began with an MVP app to overcome this shortcoming. The company introduced a manual first MVP, known as a wizard of Oz MVP, or the man behind the curtain MVP.

They developed an app by which the customers would place their orders, but there was no back-end system to ensure automation of the purchase and delivery process. So, the founders manually went around purchasing the items within the orders placed and delivering them to the customers’ doorsteps.

Only when they achieved the market fit product did they built in the backend infrastructure necessary to automate the process.

The company now has a website and mobile app for its users. Customers can make online groceries order from participating retailers with shopping being done by a personal shopper. Instagram began its journey in 2010 when it was launched in 2010 by Kevin Systrom and Mike Kriege. In a decade, it grew into one of the most popular and frequently used social media platforms in a decade, especially among youngsters.

By the fourth quarter of the year 2020, Instagram is projected to generate global revenue of 6.8 billion U.S. dollars.

Instagram began its journey in San Francisco as Burbn, a mobile location check-in app. Soon the founders realized that Burbn was too similar to another popular app.

Users were not using all the features, founders brought the focus of their app to only photo-editing and sharing, which had become a popular feature among Burbn users. They then renamed the app Instagram.

With an MVP, a business stands at low risk for testing new business ideas and concepts in the market. The following are the key takeaway for businesses.

A business must be able to define the minimum essential purpose of the MVP app clearly.

Once that is done, the rest of the app can be improved in iterations. Just as in the case with Uber where the essential purpose in the initial version was to connect with a cab driver.

2. There are different approaches to build an MVP

There are various other approaches to build an MVP like

3. Biggest Risk in MVP – Building something nobody wants

As seen from the example of Instagram, when the founders realized that a similar app was already available in the market and that users were interested in photo editing and sharing, all original features were removed.

Instead, photo edit, filters, saving, and sharing features were added.

It’s essential to test the application and validate the idea rather than keep on guessing. Our personal opinion is not necessary; what’s important is the user’s validation of the product.

5. Get live feedback from real users

Because the solution you are building is for users, you must be attentive to users’ feedback. With each set of feedback received, you will get a better idea of what works well or what needs corrections. The feedback is important at each iterative stage of development.

6. Avoid striving for perfection at the very beginning.

Don’t start overloading your product with extra features to create a fully developed product. We can learn from examples like Airbnb, who kept the site features and design minimal at the beginning.

Build A Powerful MVP with Imaginovation

Are you ready to take the next step towards developing your MVP app? We will happily assist you with this vital product development process. If you have an amazing business idea and you want to transform it into a minimum viable product, then get in touch with us.

What is an MVP?

Examples of MVPs That Became a Huge Success

Build A Powerful MVP with Imaginovation

An MVP (Minimum Viable Product) is a lot more than just a minimum product. It is all about selling an idea you haven’t yet built. We can say, an MVP is an initial version of a product with just enough features that make it usable by early customers who can then provide the necessary feedback for future product enhancement and development.

2. What are the Characteristics of an MVP App
3. Examples of MVPs That Became a Huge Success
4. Key Takeaway or Steps for Businesses Building an MVP