The Cost of a React Native App in 2022: Step-by-Step Breakdown 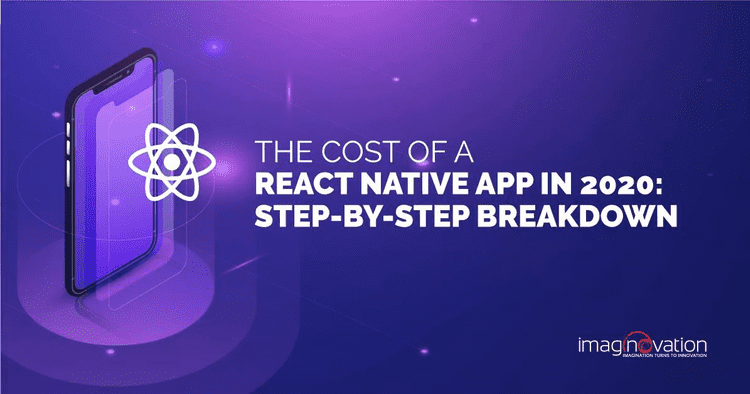 Mobile apps, by the year 2023, are predicted to generate more than 935 billion U.S. dollars in revenue via in-app advertising and paid downloads (source). Now, that’s quite encouraging!

It is no wonder why there’s a gold rush to mobile application development in 2022 using the globally-recognized trending app framework — React Native. What’s exciting is its flexibility and cross-platform mobile app development feature.

As more and more business owners are thinking of investing in mobile apps, it seems that the app development cost is one of the most common concerns amongst all.

Quick Links:
How React Native is a Cost-Effective Solution?
How Much Does React Native Cost: The Contributing Elements
Why companies select React Native?

It was not so long ago when one thought about app creation on both Android and iOS that one would need to think of two entirely different native apps or create a hybrid app using an HTML5-based framework. The downsides were that they came with severe cost and usability issues.

The excellent news with mobile apps built with React Native (RN) is that they are not only cost-effective, but they also offer you a credible choice to create a cross-platform app.

Did we say that mobile apps built with React Native can resolve serious cost issues? That’s very true! So how much does a React Native app cost in 2022?

There is no single answer to this question. Just as no-one-size-fits-all, we understand that your mobile app development requirements will determine the React Native pricing aspect.

In this article, we will drill-down on a few facets and look at why some of the companies are using this framework, the features/benefits of the app, and several other factors that play a significant role in determining the cost of developing a React Native app.

How React Native is a Cost-Effective Solution?

Let’s start with one of the best selling points of React Native, which is its cross-platform development feature. With React Native, the same team can simultaneously develop an app on iOS and Android that can cut labor costs roughly in half (source).

React Native framework has crossed leaps and bounds since it made its first public appearance at the React.js Con in 2015. Today, the framework is continuously perfecting its position backed by ever-growing developers’ interest. You can build native apps like iOS and Android using React Native, a JavaScript framework. It commenced as a Facebook hackathon project developed in response to the company’s needs. The framework offers swift mobile development, and efficient code sharing across the Web, iOS, and Android without compromising experience or application quality.

All these exciting features have led to some of the world’s largest companies using the framework. Some of the most famous companies which use RN in their products include Facebook, Walmart, Tesla, and Bloomberg.

Some apps you might have heard which were built using the framework are Instagram, Pinterest, Discord, and Salesforce. As we can see, React Native is ideal for anything from social networks to enterprise software.

How Much Does React Native Cost: The Contributing Elements

Now, let’s deep dive step-by-step into the React Native pricing — the framework is one of the most cost-effective frameworks in the market. So if you are looking at an affordable option to build an app, then you’ve got it – React Native is a great option.

There are quite a lot of contributing factors to the React Native development cost, which are inclusive of the complexity of the apps, your mobile app development requirements, and developer experience.

One of the critical elements is the developer experience, and usually, the hourly charges range from $100 to $125 in the US. However, if you’re on a limited budget, you can outsource your project to offshore development companies in countries like India, where the hourly rates are much affordable.

The key contributing factors to the React Native app development cost breakdown include:

Take any app available in the stores, and you can place it in a segment ranging from low complexity to high complexity.

Some of the factors for segmentation include:

If you are building an app that requires user authorization or login, the cost would be relatively more than apps that do not require the process of role-based checks that are usually set by developers.

If you are planning to build a customer-centric app, then you may wish to integrate your app with social media channels and also extend some add-ons for it. These custom add-ons are an essential facet in the pricing and cost — the in-app purchases are an extra add-on.

Your app’s elements, like functionality, number of real-time users, security considerations, and more, can determine your app category. It is quite logical that these intricacies will affect your React Native app development cost. The more feature-rich your app, the more it will cost.

What will keep your users engaged in your application? An app that has smooth transitions to move from one screen to another, efficient user flow and well-timed animation will help for starters.

The designing of screens and user experience could be easily associated with costs. The good news — with React Native app development, the development is at much lower prices in comparison to Native app design cost — and the best part is that only one app very needs to be designed.

In the context, it is heartening that the interest in React Native development is growing and is likely to keep increasing. It’s the #1 framework that developers want to learn in 2022. React is also considered to be more flexible and more straightforward in comparison to AngularJS, making it poised to overtake AngularJS (source).

Regardless of developers taking an interest in React, companies’ demand for this framework outpaced the number of developers who knew React in 2018, which resulted in lesser React Native developers out in the market for the development of mobile app projects.

As per the 2018 Developer Skills Report of HackerRank, 33% of companies are looking for React skills, while only 19% of developers have an idea about the technology. The good news is that more developers have begun to learn React, and the percentage of developers who know React jumped from 20% in 2017 to 26% in 2018.

If you have to make a choice-based decision between freelancers vs. development companies — a general thumb-rule would be to consider choosing a freelancer if you have a simple project in hand with a flexible completion deadline and less budget.

However, if your project is complex and you have a specific time frame, then you should consider a React Native development company.

In the context of mobile app development cost, location plays a significant role.

When it comes to hiring React Native app developers, you may find that Eastern countries charge lesser than agencies in the USA or Australia. So you may prefer outsourcing your project to reduce costs.

When you consider distribution channels to deploy your app, then each would have their pricing —stores like Google Play or App Store usually charge around $100 for developer license costs.

You may also find that the apps require permissions from the host in the context of compliance of standards and security policies.

It is imperative to keep regularly updating your apps to meet users’ expectations, which cascades to user retention and engagement levels.

Next up, let’s drill-down and see why some of these companies chose the app.

The key takeaways (of course, this is not all-inclusive) highlight some of the tangible and intangible benefits, which include:

Such positive experiences reiterate the selection of the React Native framework for the development of your app.

React Native app development has a definite edge in terms of the development of your app in a low budget — yes, it would be prudent to choose the framework.

At Imaginovation, we believe no-one-size-fits-all, and there are myriad factors that contribute to your React Native app development cost.

If you have an awesome app idea, get in touch with us. We are an award-winning team of web and mobile app developers with vast experience in building affordable React Native apps.

How React Native is a Cost-Effective Solution?

How Much Does React Native Cost: The Contributing Elements