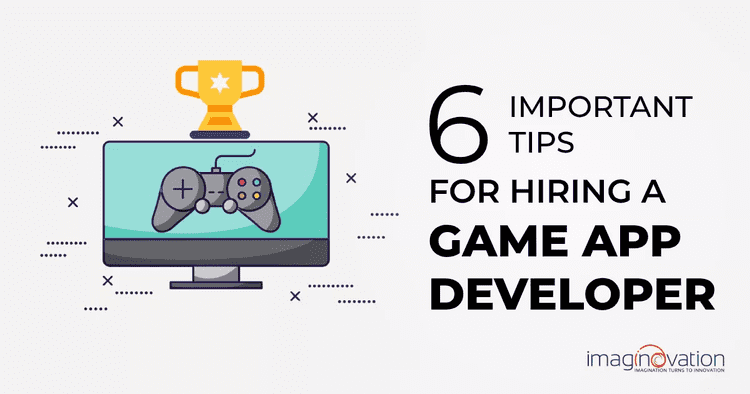 Games have always been a lucrative business. Even statistics show that revenue from the video gaming industry dominates all other entertainment sectors. For example, the global box office revenue in 2019 was around $42.5 billion, while the video games market generated a whopping $120.1 billion. That’s huge!

The numbers above show why appreneurs are so interested in developing games, and why there’s a growing demand for game app developers.

Building a mobile game application is not similar to developing a regular app. It takes a unique approach and skills. That’s why hiring a game app developer is considered a crucial step in the entire development process.

The success of your game heavily depends on the development partner you choose. If you’re an aspiring appreneur looking to hire game app developers, keep reading. We discuss 7 essential tips to help you hire the best talent and bring your game idea into a digital reality.

Technology is evolving, and finding the right talent is challenging. You need to make sure that the game developer is well-informed about the right set of tools. He or she should be well-equipped with the tech updates, cross-platform solutions, and the latest technologies.

1. Experience in Coding and Scripting

It comes without saying that the game developer should be well-versed with the scripting languages. Java, Python, and C+/C++ are some of the common programming languages used to develop games. C# is also a critical knowledge for Unity, one of the popular game engines used to create 2D, 3D, AR, and VR based game apps.

Some developers are skillful at coding aptitudes, while others focus on aesthetic game art. But every programming language of gaming differs from the other. One of the standard programming languages used in creating games is C++. With C++, programmers can write complex computer programs and designs for memory management.

World of Aircraft, Fortnite, Counter-Strike, and many more are built using the C++ language. It is widely used in Unreal Engine, a powerful game engine developed by Epic Games.

Knowledge and experience of crucial programming languages and game engines are crucial for the game developers.

You can create Playstation Mobile games with C#. Since Unity supports C# scripting, you can also create 3D games and several larger C# console applications. Besides, developers familiar with C++ or C# can easily create AR/VR and Mixed Reality games.

Java is used to build most of the multi-player games. It supports multithreaded programming that uses less memory. Java helps execute multiple programs and utilizes the maximum CPU time.

One of the benefits of using Java for building gaming apps is that it can reduce development costs. Java runs faster even on virtual machines and it’s highly productive for game developers.

Python is one of the most versatile high programming languages widely used by game developers. It helps build game architectures, simulations, networking, graphics, and user interfaces.

But, unlike C++ and Java, Python is limited to using only one core at a time, which slows down the execution speed. However, Python’s most significant advantage is it can help create AI-based games faster, thus saving time and money.

Objective-C is used for developing game apps on the Apple iOS platform. It is one of the popular choices for building games.

It allows developing robust and scalable games with its user-friendly syntax and dynamic typing of codes.

Many developers today are turning to this modern and powerful app development framework. It is used to develop apps for iOS. Swift is more compact and comes with an easy-to-code environment.

Game developers love Swift due to its balanced syntax and structure and interoperability with Objective-C code. It allows creating cutting-edge mobile games that are fast, memory safe, and a lot more attractive. Players exhibit their actions and reactions based on the genres. A multitude of genres and subgenres are being used by game developers to design the theme. These include:

It’s important that the game developer should know different genres. It can help them analyze if a particular game fits into multiple genres or an established theme. The developer needs to break down the sub-genres to create interactive experiences.

Game development is not only about the right tools, ideas, or execution. It is also about picking the right talent that complements the skill sets among other team members. A game development team involves various skill sets and expertise. It’s a shared version of everyone who works towards that goal.

Each player within the team differs in perspectives, work styles, etc. It’s essential to check the team size, structure, and understand the vision of the team of experts. There should be a healthy collaboration within the team. The team members should work on the roles as defined and duly follow their duties to accomplish the project goals.

Is the developer passionate enough for game development? Desire, ability to perform, completion within deadlines- everything matters when it comes to successful game design.

Professional game app developers go beyond their gaming ideas to develop gaming projects. If you find such genuine commitment and experience that portrays real knowledge and care of what works and what not on the app store, you are lucky!

If your gaming app lacks creativity and fun, the overall gaming experience is lost. Freedom is limitless when it comes to developing a game app that gets audience gaga over it.

Any team members that you plan to hire should be capable enough to spark that maturity and creativity. The game’s success is measured only when it keeps players completely immersed until the end.

Graphics, art, sound, programming, interactivity, and writing- each skill counts to create games that players enjoy. Ensure that the technical abilities balance the creative side to make games exciting and run well.

Bugs, poor UI design, frequent crashes – you know how frustrating it gets for players. Such an experience can break the game app completely. You can’t expect an application with zero bugs. Sometimes, even players could discover new bugs while playing.

Therefore, the game app developer should be able to provide you support as and when required. The goal of a developer is to provide the best in-app experience while reducing bugs and maintenance costs.

A bug-free game delivers a smooth experience and keeps players engaged for longer. An app with an elegant UI design can stand out in the crowd.

According to the report, 7 out of 10 apps downloaded from Google Playstore in 2019 are the highest revenue-making games. But, as lucrative as it may seem, developing a game app is not a cakewalk. It takes a detailed strategy, meticulous planning, continuous updates, and experienced developers to create a successful game app.

Game app developers should try out new concepts like AR/ VR, animation to create unforgettable journeys. And he/she should be able to quickly adapt to technological advancements.

What worked in mobile game development a couple of years ago is vastly different now. Whether it is Android or iOS game development, only the right creative talent can build an immersive gaming framework.

The ever-increasing hunger for games pronounces the need for hiring best-talented designers. But what are the skills that characterize the best game developers? Today, UX designers account for 25% of open gaming roles. One of the vital game development skills is UI design. Rich user interfaces have a great impact on the overall gaming experience. The game app developers must be familiar with different design aspects of games, UI development, UX, and more.

You don’t want your game app to be restricted to a single platform only. As you scale up, you might want to provide your game for the mobile, tablet as well as laptop/desktop users.

For any game app developer, knowledge of cross-platform development engines is crucial. Whether iOS, Android, or Windows, developers should be versatile enough to build applications across different platforms.

No matter how big or small the project is, it’s always wise to draft a budget for your app development project. While hiring a skilled game app developer, the first consideration that comes in mind is the budget.

There are myriad factors that influence the game app development cost. It depends on the operating platforms, pre-development expenses, complexity of the game (simple, mid-level or high level), a story, complexity, and so on.

Check out more about game app development costs in this blog. You can also try our project cost calculator tool to get the ball-park estimates.

Developing a game needs unique skills. We, at Imaginovation, can help you turn your ideas into a digital reality. We are an award-winning mobile app development company with vast experience in developing games in different genres.

1. What are the Tips for Hiring Game App Developers?

It’s important that the game developer should know different genres. It can help them analyze if a particular game fits into multiple genres or an established theme. The developer needs to break down the sub-genres to create interactive experiences.

2. What are the Skills Needed by Game App Developers?