Rising Significance of Serverless Architecture in App Development: Benefits and Use Cases 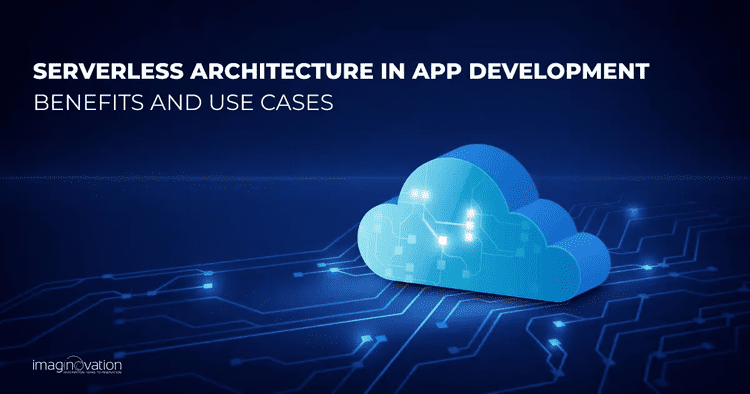 Would you believe me if I were to tell you that serverless isn’t really serverless?

I mean, it's not that there are no servers. They are there and do the work they are supposed to do. But, they are no longer your problem.

Someone else manages them, taking away the responsibility of provisioning and managing the infrastructure. It facilitates you to invest your time and resources in applications and software development.

This approach, offering a host of benefits, is serverless architecture.

But how does serverless computing work? Is it actually the right move for you? What are its core advantages? We will answer these questions one by one.

We will also talk about some widely adopted use cases of going serverless.

What is Serverless Architecture?

When you plan to publish a software solution on the internet involves managing server infrastructure.

It would help if you had a physical or virtual server to host the operating system, database, and other application files.

In the early days of technology, anyone building an app had to own the physical hardware needed to run a server. That was doable but a cumbersome and costly endeavor.

Then came the era of cloud framework, where companies started renting fixed numbers of virtual servers or fixed amounts of server space. Unfortunately, that resulted in companies over-purchasing server space to handle an unexpected spike in traffic. And companies soon realized that much of the server space paid for by them goes to waste. Serverless architecture, introduced later, allows tech teams to buy backend services on a flexible 'pay-as-you-go' model. So the companies pay for only that much of the services they use.

So, serverless is an approach to building, assembling, and running applications and services without dealing with the infrastructure.

Applications and services still run on the server, but the server space is managed by an outsider partner, not the company developing the app. This way, you can eliminate architecture responsibilities such as purchasing new hardware components, installing, scaling, troubleshooting, and maintaining your workload.

With the backend outsourced, organizations have one less issue to stress over and focus on only the front end as their primary concern.

Because of the kind of benefits it offers, such as controlled cost and easy configuration, the market size of serverless architecture is growing well.

Statistics tell us that the Serverless Architecture Market size in 2020 was more than 7 billion USD. It is expected to rise further at over 20 percent CAGR from 2021 to 2027. (Source)

How Does the Serverless Architecture Work?

Serverless architecture is based on a FaaS (Functions-as-a-service) model. It helps the cloud platforms run software code without needing entirely provisioned infrastructure instances.

Moreover, developers rely on serverless to work on specific functions. That’s why we see many cloud service providers offering FaaS.

API Gateway is used to navigate user requests to the right function.

Here’s how your tech team can write and execute functions in serverless computing.

Serverless architecture is not a brand-new concept. It has been around for over a decade; In 2014, Amazon introduced its first mainstream FaaS platform, AWS Lambda. It is still widely used by the developers' community for building serverless applications.

However, Google, Microsoft, and IBM have launched their FaaS. They are called Google Cloud Functions (GCF), Azure Functions, and IBM OpenWhisk, respectively.

You can enjoy a host of benefits by going serverless. Let's closely examine the strengths of adopting serverless architecture and why it should be the right choice for your next application. Human resources and infrastructure are the key cost elements for any software project. With its pay-as-you-use model, serverless brings down the infrastructure cost.

For example, if your startup website has less than 1,000 visitors, switching to a pay-as-you-go model will help you cut down approx 90 percent of the backend resource and maintenance costs.

In addition, since you can now focus on building solutions instead of maintaining infrastructures, the ROI of your company improves. The result? Reduced operational cost.

You can learn from the example of HeavyWater Solutions, Inc. The company uses AI/ML solutions to offer business process outsourcing.

At one point in time, the monthly cost of running their AI application was 30,000 USD. This reduced to 4,000 USD in less than four months as soon as they shifted to a serverless architecture.

2. Takes the Focus Off Infrastructure Management

With serverless, developers can focus their efforts on the product rather than worrying about infrastructure management.

While building software, some problems demand significant developer time. For example, issues encountered while scaling up/down an application demand considerable developer time. But, serverless takes off this workload from the developer, and the third-party vendor pitches in to do this work.

Moreover, when developers and engineers use serverless to deploy their code without managing any servers, it accelerates app delivery cycles and quickly scales company operations.

The faster, cheaper application development process of serverless boosts innovation by reducing the price of failure - Once again, without server management.

Traditional architecture, even the ones based on the cloud, gets overwhelmed by sudden traffic/increase in the number of requests.

On the other hand, serverless architecture scales automatically to seamlessly meet sudden demand before scaling down again. It means a serverless app can easily handle unusually high peaks in requests and can also process a single request from a single user, in the same manner, without needing any manual intervention.

So, serverless apps can scale up or down with growing or reducing usage. When a function needs to run on multiple instances, the servers start, run, and end as and when the need arises, with the help of containers.

This is why businesses that prioritize user traffic choose serverless architecture. Serverless infrastructure ensures you don't need to upload code to the servers for any backend configuration required to release an application's new version. Instead, the developers can simply upload codes and release the version.

This means the tech teams are not required to look out if an update was rolled out across all devices. In fact, when you add in a new app feature or technology, all customers will be able to access the update in almost real-time.

'Latency' is the duration of the delay before requested data/information loads in the app. When latency increases, the number of users who leave the application/webpage increases.

With edge computing, the code and database of a Serverless application can be run from any place in the world. So providers can run functions on servers that are as close to the user as possible. In addition, it helps lower the latency because requests don't have to travel to an 'origin server' that could be too far off.

So, if you have an international target audience, you should consider your Serverless vendor's global data center infrastructure, such as AWS. Serverless architecture makes the execution and maintenance of apps easier than traditional servers. We may think we have targeted the right audience or that our product has been perfectly developed.

Serverless facilitates businesses to innovate faster and experience quick results. As a result, startups can pivot as an organization with much more freedom and benefits.

Real-world Use Cases of the Serverless Architecture

Let's read further and understand how companies across industries benefit from this innovative technology. Here are some real-world use cases of serverless computing.

Nordstrom is an American department store chain headquartered in Washington. It was founded more than a hundred years ago.

The company has always stayed in touch with the latest trends in innovation and technology. And is one of the early adopters of serverless computing.

The result? Nordstrom stays above many others in providing seamless and efficient services to its customers.

How was Nordstrom able to do this?

They began building apps based on individual events instead of designing data-driven applications. Another thing they did was they created Hello Retail - an open-source retail store architecture using proof-of-concept serverless. Their decision to migrate to AWS helped them enhance their overall performance.

The international soft drink giant Coca-Cola started experimenting with serverless tech through its vending machine. And now, their entire business model is based on that model.

Want to know how its serverless vending machine works?

When the customer buys a coca-cola beverage, the payment structure calls on the API Gateway and initiates an AWS Lambda function (since it is based on AWS) to finish a transaction.

Because the vending machines communicate with the company headquarters for marketing and inventory requirements, their ability to pay per request instead of functioning only when it is at full capacity leads to a clearer insight into what the consumers need.

Users get additional security with Codepen.

AWS has enhanced monitoring of the activities on Codepen, making it simple for the company to make required changes;

The company serves as many as 200K requests every hour when the infrastructure is managed by one experienced DevOps engineer, bringing cheaper operational costs.

It costs less than the amount spent on getting/managing your own servers.

The business is now using many ready-made solution templates, saving precious time without being afraid of unnecessary expenses if one of the mechanisms is compromised.

Based on AWS Lambda, Netflix is a subscription streaming service & production company.

The serverless architecture adopted by Netflix has facilitated it to publish content easily. The media mogul gets several files from publishers daily, which must be sorted and encoded before they are delivered to the user.

For this, AWS Firebase creates and initiates an event once the files are uploaded to S3 for calling the Lambda function. This divides the videos into small 5-minute sections encoded in 60 different streams that Netflix needs. Finally, with the help of several events and rules, the final portion of the video gets aggregated and deployed.

Additionally, the architecture can alert and shut down the unauthorized access. Netflix can also identify the reason for an issue when something is wrong with the help of Lambda's continuous file verification.

Embrace Serverless Architecture for Your Next App With Imaginovation

Are you ready to capitalize on these opportunities, go serverless, and take the giant leap forward?, if yes then talk to us.

With extensive experience in building web and mobile solutions, we can help you easily migrate to the serverless infrastructure and build unique, cost-efficient, and impressive solutions with all the desired features.

What is Serverless Architecture?

How Does the Serverless Architecture Work?

Real-world Use Cases of the Serverless Architecture

Embrace Serverless Architecture for Your Next App With Imaginovation

1. What is Serverless Architecture?

Serverless architecture allows tech teams to buy backend services on a flexible 'pay-as-you-go' model. So the companies pay for only that much of the services they use.

So, serverless is an approach to building, assembling, and running applications and services without dealing with the infrastructure.

Applications and services still run on the server, but the server space is managed by an outsider partner, not the company developing the app. This way, you can eliminate architecture responsibilities such as purchasing new hardware components, installing, scaling, troubleshooting, and maintaining your workload.

With the backend outsourced, organizations have one less issue to stress over and focus on only the front end as their primary concern.

Because of the kind of benefits it offers, such as controlled cost and easy configuration, the market size of serverless architecture is growing well.