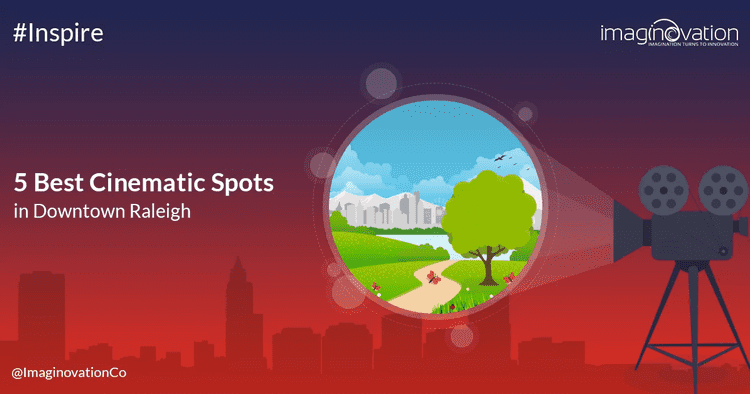 Raleigh is a beautiful city, with character and interest that offers bountiful opportunities for inspiration when it comes to video production. Whether it’s a commercial venture or an artistic one, these five locations in and around downtown Raleigh are versatile and accessible enough to meet the needs of a wide variety of businesses and interests.
The best part? These locations for filming in Raleigh can be spun into urban or rural settings, depending on the demands of your project. Whatever you need to get on video, you’ll find a great place to do it in Downtown Raleigh.
All of these locations are open to the public, easy to find and brimming with character and interest.

Most locals who have lived in the Triangle for while know Dorthea Dix for its famed hospital, which drew people from all around the country for treatment. The hospital closed in 2012, and in 2015 the City of Raleigh bought the 308 acres of its campus and began the work of transforming it into a destination public park.

The park is open daily to the public from dawn to dusk. Be aware that there are currently no public restrooms on site. Also be aware that the Department of Health and Human Services has its headquarters on the grounds of the park, so there are some restrictions on noise and parking during business hours.

With rolling hills, vast tree-lined paths and incredible views, there is nowhere else like Dorthea Dix Park anywhere. You’ll find quiet corners and open landscapes enough to serve as the backdrop for any number of story lines. Dix Hill, the site of the park, is breathtakingly beautiful during most any season. It is truly an oasis, located just ten minutes from Downtown Raleigh.

Nestled on almost 70 acres right next to NC State University, Pullen Park is truly a playground right within the city of Raleigh. Unlike Dorthea Dix Park with its expansive rolling hills, Pullen Park is closer in, with paths and small spaces worth exploring in your search for just the right location for a video shoot in Raleigh.

The park is home to a wide variety of venues – rides, playgrounds, a lake, an aquatic center, a theater and spectacular bridges. It’s actually, technically, an amusement park (though general admission is free). There is only one statue here – Andy and Opie from the Andy Griffith Show, a celebration of a famous North Carolina family.

Operating since 1887, Pullen Park is rich with history and memories.

Located right next to Raleigh Little Theatre, the Raleigh Rose Garden can be found in Fairmont, close to Downtown Raleigh. Whether you’re shooting still photography or sweeping video, you’ll find the intimacy of the Raleigh Municipal Rose Garden to be charming.

With over sixty beds of roses and more than fifty varieties of roses, you’ll find an incredible display of color and beauty from late May through early autumn. The Raleigh Rose Garden is literally a gem inside the city. Even off-season the space is magnificent, with architectural features like stone structures, a hanging trellis walk, winding paths and a water feature – perfect for a wide variety of scenes. There’s even a small amphitheater, with a stone and wood stage and rows of wooden bench seats.

Built in 1840 and originally housing the majority of the North Carolina state government, this impressive venue is located in the center of town. The North Carolina State Capitol currently functions as the offices of the Governor. It’s looming and hard to miss, with stately columns and statues.

The grounds of the State Capitol tantalize with staircases and broad benches, centuries old trees and winding paths. For a video shoot, the building and its surrounding park area could substitute for any number of settings and it’s a surprisingly quiet spot given its location in the middle of the hustle and bustle of downtown.

For a truly spectacular setting for shooting video, try heading over to the North Carolina State Capitol at night, when spotlights highlight the statues and the architecture of the building. Or check it out around Christmas, when there’s a festively adorned tree along with other decorations to be found around the building and on the grounds – perfect for a holiday themed video shoot.

For a true downtown feel, check out the Historic City Market in Raleigh. Located just south of the State Capitol, the City Market has cobbled streets and quaint storefronts. The aging brick buildings coupled with bustling shoppers offer so much possibility for filming.

The shops of the Historic City Market are as varied as the residents of Raleigh. Quaint outdoor cafes, boutique stores, busy bars, art galleries, all kinds of specialty shops fill the blocks around Moore Square as part of this this well-loved downtown location. On the first Friday of every month, City Market holds a First Friday festival, with vendors filling the space and hoards of extra visitors crowding the streets.

Many of the buildings in City Market date back to 1914, giving the area a turn of the century appeal and providing a truly unique aesthetic in Raleigh. There is an historic air paired with a modern sensibility that makes the area perfectly suitable to film commercial or artistic video.

Whether you’ve lived and worked in the City of Oaks for years or are a relative newcomer, you’ll find these five video locations in Raleigh to be refreshing and amazing any time of year. With our mild climate and the marvelous accessibility of these film venues, there is just so much possibility waiting for you right here in Downtown Raleigh. Who knows, perhaps you’ll be inspired to start your own video project!