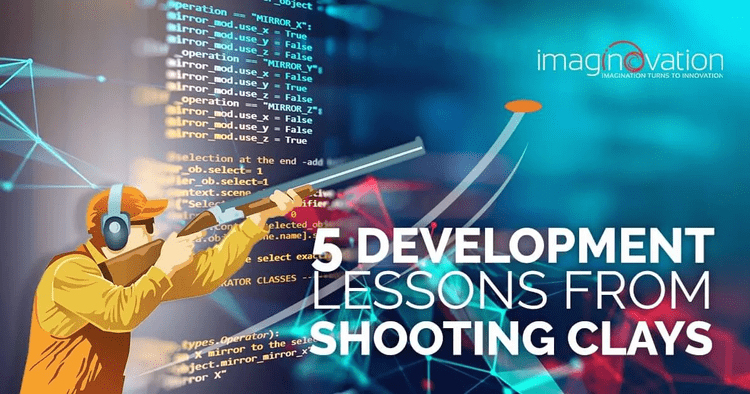 Developing software and websites is a challenge, even for the best teams. Even if you have a team who can write clean code and solve problems, achieving the result — a finished product — isn’t something everyone can do. One of our team members at Imaginovation recently compared some of our work to shooting clays. To which we queried: how does that work?

The History of Clay Shooting

First, the sport of clay shooting is a modern version of the great pastime of shooting pheasants and game birds. Royals and others would target hundreds of raised birds in a day. According to the Washington Post, trap shooting with live pigeons started in the U.S. around 1825, and official matches sprung up shortly after. Later, it became more economical (and eco-friendly) to shoot other things. Americans led this effort, developing glass balls containing feathers, then clay targets for trap competitions. People soon built a mechanical means to throw the clay birds. Today, around 5 million U.S. residents ages 6 and older shoot clays. The sport of clays is played in two different ways. In the first, a shooter will yell, “Pull,” prompting the mechanical device to throw the clay “pigeon.” To shoot the clay, one must anticipate where it is going, shooting where the clay will be — not where it is. If one tries to shoot by following the clay, they will miss.

In a more advanced version, the machine throws one or more clays at the same time, usually one low and one high from opposite directions. The shooter must be fast to hit both before they move out of range or fall and break on the ground. When competing, the shooter with the most clays hit in a match wins. How Clay Shooting Ties to Web and Software Development

On the surface, this sport has little to do with coding and software development. But we have found a few lessons from shooting clays that apply at work.

We look for lessons everywhere we go, and shooting clays feels a lot like our Agile project development. Talk to us about your next project, and we’ll help you follow the non-linear path so you can achieve the product you envision.