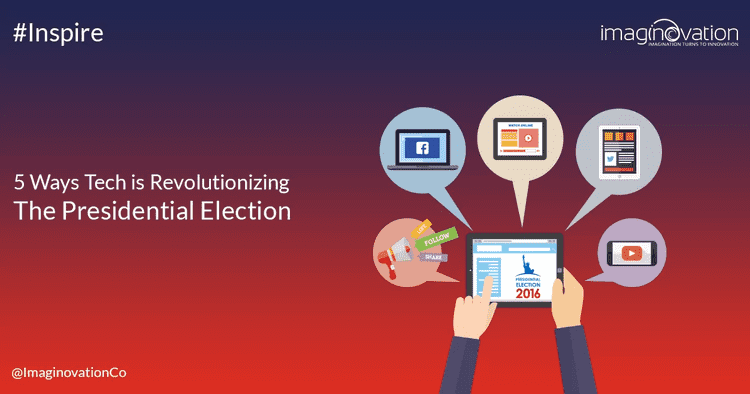 Eight years ago, then candidate Barack Obama was the first major presidential politician to utilize technology by fundraising online. This year the dramatic upswing in live coverage of presidential events like the debates, the Democratic National Convention and the Republican National Convention, along with the incredible power of Twitter and other online social media platforms, has completely changed the game when it comes to choosing the next leader of the free world.

The biggest boon that’s come from streaming video is perhaps the ability of millions of cord cutters to watch the major events of the electoral cycle. Both major party conventions were available on streaming, with access on YouTube, Facebook, Twitter, individual websites and more. Four years ago in the 2012 election, there weren’t options to watch these events live without cable, and certainly not on mobile devices. In 2016, it’s possible to catch the campaigns anywhere on a smartphone, live while it’s happening.

It’s not just livestreaming that’s coming out of the campaigns anymore. 360 video is allowing people to be right there for the election events. Embedded coverage from Stephen Colbert during the RNC offered an insiders glimpse into the goings on of a major party convention, with hilarious results. We’re also seeing video coming straight from the people who are there, rather than being controlled by the campaigns or by the media. That’s a massive change from elections past, which have been so carefully orchestrated by the people who were in control.

More than ever before, we’re seeing campaigns being able to effectively target potential donors and voters. Whether it’s through text alerts, Facebook ads or even traditional email and phone marketing, campaigns can more effectively reach voters and donors that matter.

Gone are the days when campaigns had to reach out to get lists of email addresses, phone numbers or mailing addresses. Today they can target potential voters right where they’re at on social media and Google. This kind of targeting has been effective for Green Party candidate Jill Stein and Libertarian nominee Gary Johnson, as their campaigns can reach out to potential voters without having to spend an insane amount of money or having to create a massive infrastructure on the ground, as was necessary in previous election years.

Fact checking has become an artform in the 2016 election.

We’re seeing it come from major media sources and from our friends on Facebook. The instant access to everything that everyone that’s been published online, every tweet and interview, means that there’s no way to hide anymore. We’re used to politicians double talking, but now in this new world of online technology, they can’t hide it anymore. The minute that a presidential candidate says something that’s a half truth or a falsehood, it’s instantly pounced upon by sources all over the net.

Fact checking has consistently gone even more live and accessible, with major news outlets adding live fact-checking to their coverage of the presidential debates. It happens on the floor of press conferences as news reporters reach down for their smartphones to pull up exactly what candidates have said or done previously.

Platforms like Slack and Basecamp have created massive changes in the ways that campaigns organize themselves. Just as we’ve seen a revolution in the ways that businesses use online technologies to better manage their workforce and to better connect with one another, we’re seeing presidential campaigns connect more effectively than ever before.

This is a point that can’t be overstated, that can’t be overemphasized, because national campaigns are all about coordination. The electoral college means that connecting state campaigns with one another and with the national leadership is key to winning the election. The more coordination and information sharing, the more potential there is for a campaign to win in November. We’re also seeing a better coordination within political parties all the way down the ticket, with the DNC and RNC lending more support and logistical weight to those candidates for state and local elections. All of this is possible through online product management software that was created for businesses, but that has proved to be incredibly effective for political campaigns.

It’s impossible to talk about the dynamics of the 2016 election without talking about Twitter. Though the social media platform has been around for over a decade, and this is the third presidential election since it’s been rolling out its 140 characters, never before has it been as effectively utilized as this year.

Both major party candidates, Hillary Clinton and Donald Trump, have used Twitter effectively to stir up their bases during this election. Trump is of course now famous for the off the cuff remarks that fill his Twitter feed. He’s harnessed the power of this platform to reach over twelve million followers, plus millions more who read about his tweets in the mainstream media.

There’s an immediacy to Twitter that’s just not been there in other elections, and Trump has changed the way that candidates reach their constituents – without handlers or vetting of commentary. This is him, like it or love it, right out there. His openness has allowed the world to get into the mind of a presidential candidate at three in the morning, a window that we would never have had previously. It’s a tactic that’s worked for his campaign, but one that wouldn’t be possible without the modern, mobile tech of today.

For those few people knocking me for tweeting at three o'clock in the morning, at least you know I will be there, awake, to answer the call!

It’s not just candidates who are using Twitter, it’s their surrogates as well. Elizabeth Warren has proved to be a powerful voice for Hillary Clinton on Twitter, going back and forth with friends and most notably with foes. Her biting tweets to those who would oppose the potential first woman in the White House have gone after Clinton’s opponent in with harsher critiques than the candidate herself could have gotten away with. It’s proved to be a huge boon with millennials, a coveted group of voters that both sides are vying strongly for.

Twitter, more than any other social media platform, is technology that has revolutionized the Presidential election in 2016. In fact, many commentators agree that Twitter has turned out to be a key turning point in this election, one that has materially affected the outcome of the United States government.

Technology in 2016 has meant that this presidential election looks wholly different from elections past and we can only speculate what further technological advances might mean for elections going forward. The revolution in technology has not only changed the way that campaigns are run, it’s also materially affected the outcome of the race, changing who becomes President of the United States.