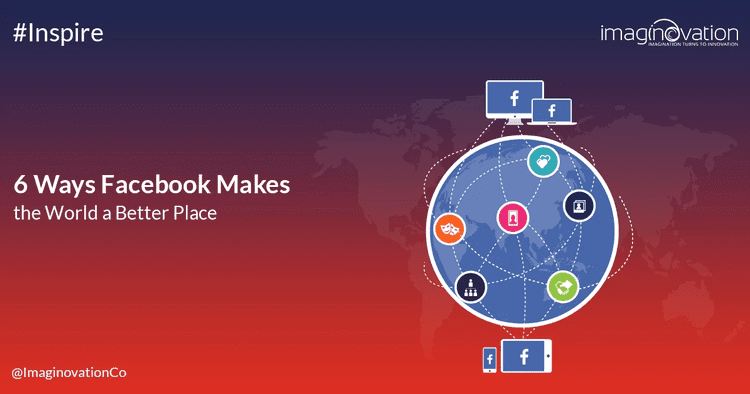 Let those figures sink in for a minute. This is Facebook we are talking about – a wholly optional place for us to be.

Facebook is ubiquitous, and it is apparent that the users’ appetite for it is insatiable.

For many, it’s a part of their everyday lives and therefore affects them on a significant level.

Since its inception in 2004, Facebook has seen a stratospheric climb in its popularity. It has long ceased to be the den of the vain and the gossip-loving, and has become almost indispensable to the lives of people around the world.

How did this happen? The slew of features the social network introduced from time to time clearly had a home in the platform, but its power lies in the fact that it keeps things basic, allows people to connect and delivers this experience rather well on a consistent basis.

Relationship status, dedicated groups, business pages have managed to significantly shape the way we see the world. Here are some major impacts that come to mind.

Never before have been other people’s relationships, or their lack thereof, so much fodder for public consumption.

Humans are inherently curious about what our neighbors, friends and family are up to. With Facebook, gossip is easier than ever — and so is voyeurism.

The ‘It’s complicated’ relationship status captures the predicament of the love lives of many of us who seem to be getting nowhere in the matters of heart.

Memories have taken on a new meaning

Events of all kinds – large, small and mundane – are shared on Facebook. A random 2am thought becomes a memory you could look back a few years from now.

Birthdays, weddings, graduation, even death announcements are made via Facebook.

Facebook allows parents to create pages for children to tag memories. Facebook accounts become memorial pages when someone passes on. It’s almost as if there is no past or present. Everything is present in one timeline, an unbroken stream of events that you are not allowed to forget.

Friendships have taken on a new meaning

We can be friends with hundreds of people at a time and may not even see most of them again. In fact, we may not have even met most of the people in our Friends’ list and have no intention of doing so either.

Yet, they are our friends.

That is a curious phenomenon belonging exclusively to the decade of Facebook.

Never before has the word friend been used so loosely. Your mother is a friend, so is that classmate from ages ago, so is an ex-colleague you could barely stand, so is someone you met at some party you can’t even recall properly.

We also have ‘friends’ that we have never met, whom we don’t even know.

From the personal to the global. That is how Facebook works.

The internet is a democratic society’s dream come true. Rather, it’s a dream come true for the democratic-minded people. There is a reason it is banned or censored in so many countries. It has made information available for free to large numbers of people and given them a public platform to air their (often contentious) views on. One can see why this would be a thorn in the flesh of regimes that are not exactly enamored of free speech.

From the Arab spring of 2011 to the EU immigrant crisis of 2015, social media played a big role in gathering like-minded people around a cause. Some have even maintained that Facebook groups and retweets led to the genesis of the Arab revolution. Wherever you look, social media in general and Facebook in particular are playing a pivotal role in consolidating mass movements.

Thanks to Facebook, we have Social media marketing. Wherever people flock to in large numbers, businesses are bound to follow.

The internet itself has created millions of jobs; web design, web development, digital marketing, SEO, content marketing, etc. Facebook is a big part of the greater revolution called the internet, and to that extent it could be argued that were it not for Facebook, some other network might have come along and tapped into the market that was there for the taking. Facebook wasn’t terribly original when it came into existence, but it made the right moves and evolved with the times. It anticipated needs, if not saw them and tapped into them, to create features that turned out to be huge successes. (Facebook has also made many wrong moves but that is a topic for another day. On the plus side it has listened to the criticism and has been relatively quick to check the ‘false steps’.)

The evolution of technology, the proliferation of smartphones, and super-fast internet speeds – these have all helped Facebook’s rise and in the process created hundreds of millions of jobs around the world.

People now spend their entire days managing brands on Facebook. Businesses acquire new customers through Facebook. Advertising has become non-intrusive and streamlined. Big media publishers are finding greater number of readers through Facebook, as well as increased engagement with users. There is a healthy symbiosis going on between the producers of content as well as the consumers of it – social media is enriching the lives of the most of us.

It helps us connect during tragedies

A Turkish acquaintance marked himself safe on his Facebook during the recent suicide attack at Istanbul airport. That was a relief to know for friends, family, and well-wishers.

At times of such tragedies or disasters, Facebook’s safety check feature helps reach users out to those that matter via a small checkmark and puts people’s minds at ease. The feature was launched in 2014 after Facebook engineers observed how people rely even more on social media during times of crises and how it can be a tool to help people reconnect, let their plights be known, and check up on each other.

Users can inform their followers that they are safe as well as find out about the well-being of others. Facebook uses the location feature to determine if you are near the place of a major negative development and asks if you are safe. It’s only a matter of saying yes and choosing to decide whether you would want to know if your acquaintances located nearby are also safe.

The feature was initially meant to be used in cases of natural disasters but since the Paris bombings of 2015 is now being used in cases of terrorist attacks as well. Facebook is still in the process of refining what qualifies as a tragedy on a smaller scale.

“This activation will change our policy around Safety Check and when we activate it for other serious and tragic incidents in the future. We want this tool to be available whenever and wherever it can help,” said Alex Schultz, Facebook’s Vice President of Growth in a statement.

What started off as a simple closed network for university students in 2004 has in just over 10 years become one of the biggest drivers of social and political change in the world. That is stupendous and a testament to the power of technology. It’s also the sign of the times we live in. Is your business prepared?

Memories have taken on a new meaning

Friendships have taken on a new meaning

It helps us connect during tragedies