7 Truths About Programming that Developers Should not Believe! 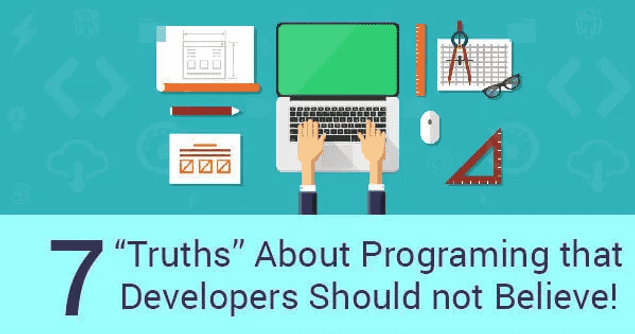 We are all well aware about the importance of programming languages in the world of software development; they are the life blood of a web or software application. These languages bring application functionality to life and determine whether it goes on to set new industry benchmarks of functional efficiency or falls by the wayside. For this reason, it is important that developers are well versed in all aspects of the programming languages they are using and keep themselves updated with the latest versions of the language or its evolving applicability.

Amongst the many bottlenecks developers can face as far as the perfect use of programming languages is concerned, there is one problem area that stands out – the myths that surround the use of these languages. For many developers, these myths take the shape of ‘truths’, which over a course of time can make a mess of their programming skills. It’s important these myths are busted and developers are able to separate the wheat from the chaff.

Let’s take a look at 7 “Truths” that are commonly believed by developers, but which they shouldn’t:

There is a half-truth here. Programming can be easy and it can really be very difficult. It really depends on the individual. But a very real problem arises when you have the wrong idea about programming. Some people think, programming is nothing but writing if-then-else statements and if you get the hang of them, you can master just about any programming language under the sun. Sorry to burst the bubble, but programming is much more than these statements. In fact, programming and we are talking about really ‘awesome’ programming is a real tough cookie.

It takes years to become a developer skilled in programming and it requires a special sort of commitment and passion to become a programmer who knows the ins and outs of some of the most popularly used programming languages.

Do not take it lightly. And don’t expect to become an astute programmer in a hurry. The best programmers in business have put in loads of efforts to develop their proficiency. Be prepared to put in the hard yards.

2. There is a super programming language

There are no shortcuts in programming.

Think. Can you seriously learn every new language that is making an appearance on the scene? For e.g. Apple has just come up with a new language for app development called Swift and it’s already started accepting Swift apps for iOS. In this particular case, if you are an iOS developer, you definitely must learn the ropes of Swift. But if you aren’t, there is no reason why you should learn this language.

The idea is to only focus on languages that are relevant to your domain. Why waste time learning a language that has no relevance to your work? Yes, it might be all the rage, but if it has nothing to do with what you are doing, going out of your way to learn this language, is a bad idea.

4. All languages become outdated after some time

Do languages have a shelf life? Well, some of them do, but the really good ones don’t. There are some languages that do not die and keep reinventing themselves. As a developer, you must become an expert at some of the evergreen languages and then keep adding to your language mix as and when you think there is a need to learn a new programming language.

The idea that all languages become outdated is wrong. The best languages, especially the ones that are commonly used in programming, evolve to meet the changing needs of developers.

5. Programming frameworks is a wonderful idea

Yes they are, but only up to a point. The problem here is that the easy availability of programming frameworks has led many ‘budding’ developers to believe lack of language proficiency is acceptable. By delegating coding to frameworks, developers think they can get away with limited programming skills. Well, it’s time to wake up. Over reliance on automated tools will not only affect your coding ability but also your capability of finding errors, in case a code goes wrong.

If you want to ensure that the framework you are using is producing clean code, you need to be well-versed in programming and secondly, you need to be very clear about the rules a particular framework is subscribing to, otherwise you have no way of knowing what is going to happen in response to a particular query.

6. The mark of a good programmer is speed

The need to achieve fast turnaround times for a project has led many project managers to place a lot of premium on a developer’s productivity. If a developer is able to produce code quickly, he/she is labeled a ‘productive developer’. In this scenario, good developers put themselves under enormous pressure to increase their productivity and end up making a truckload of coding errors.

The truth is – the mark of a good developer is solid programming that is characterized by clean coding and its reliability. Rather than focusing on judging a developer’s ability by the speed of the work output, clients and project managers alike must focus on the developer’s code quality more than anything else.

For many developers, the real determinant of expertise lies in the complexity of the code. Actually, this is the kind of thinking that lands plenty of developers in hot water. Experienced developers will tell you the real test of programming is simplifying a complex problem; this allows them to come up with cleaner codes and better results.

One-upmanship in development is a really bad idea, where you, the developer, try proving your programming credentials with some complex coding. Nine times out of ten, there is a potential to fall flat on your face, in such cases.

These are just some of the “truths” about programming that developers continue to believe. There are many more out there trying to destroy even well-intended programming efforts. Keep a look out for them and make sure you don’t believe any of them.

2. There is a super programming language

4. All languages become outdated after some time

5. Programming frameworks is a wonderful idea

6. The mark of a good programmer is speed