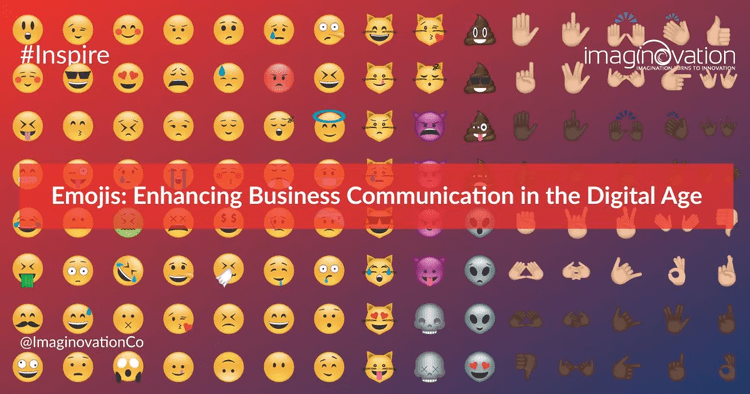 In honor of \[World Emoji Day](http://worldemojiday.com/), we’re celebrating the use of emojis in business communications. Emojis aren’t just for tweens and reality stars, they actually offer a unique and friendly way to engage with colleagues and customers.

Technology is a barrier to emotional connection. There’s just not a replacement for sitting across from another person and being able to read the emotional subtleties that they convey through body language, tone of voice, inflection, etc.

Though an emoji can’t replace a handshake, they do convey a level of human communication that doesn’t happen with text alone. While businesses might be hesitant to jump into emoji use, it’s not something to be nervous about. Using emojis can offer businesses the best of all worlds – giving them the humanization that they need to connect with customers effectively.

Professionalism is increasingly less important for businesses. Or perhaps more accurately, professionalism in business is going through a massive evolution in the wake of technology. Gone are the days where businesses needed to be buttoned up in order to keep employees productive.

How should you use emojis in the business setting? We’re glad you asked. Here are some ways that emojis can work in the workplace.

Here are a few things to avoid in the workplace with emoji use.

Given the incredible amount of online communication that happens in the workplace today, using emojis to convey emotion just makes sense.

In today’s world, businesses are better served to get close to customers and engage them on a friendly and personal level rather than go for slick and overly polished interactions.

Though businesses might be hesitant to use emojis with customers for fear of coming off as less than professional, the truth of the matter is that emoji use makes online communication seem more familiar and less awkward. When you’re working to build trust with customers, using emojis is a perfect way to improve your relationship with customers.

One of the biggest things that your customers are looking for is a company that’s trustworthy but also approachable. Emojis are a simple way to make customer interactions more personal.

While it’s certainly possible to overuse emojis, the bottom line is that they are extraordinarily beneficial for businesses when it comes to customer interaction. Don’t go overboard, but don’t miss the boat either!

Emojis help customers to feel like someone cares about them, that there’s a human side to your company.

Major businesses learned to improve their conversions with emojis.

Recently, the beverage company Tampico created an effective and fun campaign in which users had to choose a combination from among 24 emojis. Whoever guessed the correct combination and used the hashtag #TampicoEmojiball won the prize.

Another ad campaign that effectively used emojis recently was the movie Deadpool. This film’s marketing team created a customized set of emojis based on the titular character, then featured them in their ad campaigns and on their merchandise. It became an instantly recognizable iteration of the character.

For the release of the Beatles catalog on Spotify, the company created a custom emoji featuring the Fab Four and also used an emoji contest to allow users to unlock playlists. This genius emoji idea was part of the incredible success of the Spotify campaign, with the site garnering more than 80% of the online conversation about the topic, even though multiple streaming sites gained access to the Beatles catalog at the time.

One of the earliest adopters of emoji used was Domino’s, who created a campaign using emojis back in 2015. Incorporating their Easy Order process with Twitter, Domino’s enabled customers to order a pizza by using only a pizza emoji!

The bottom line on emojis for business

The rise of social media has changed the landscape of how businesses can interact with customers. In today’s world, people want to have a personal connection to the companies that they buy from. Interestingly, the distance that technology brings to human interaction is being pushed back against by the very technology that created it. As technology improves, people are finding new ways to communicate emotion and humanity. Emojis offer businesses a way to reach out to an audience online in a way that seems less impersonal and more approachable.

The bottom line on emojis for business