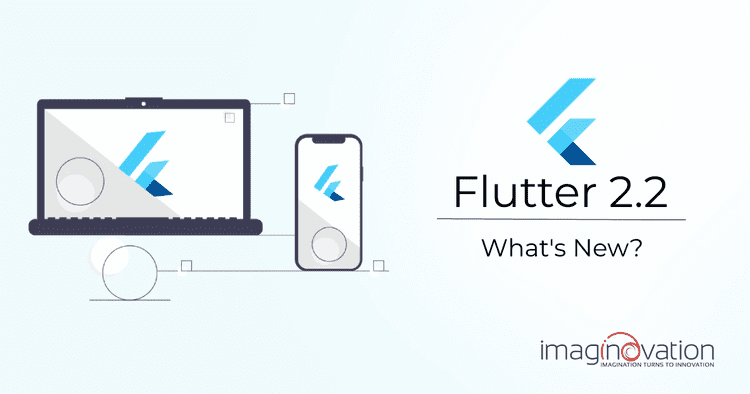 Back in 2018, Flutter had taken the app development industry by storm with its focus on increasing the developer’s productivity. Since then, building cross-platform applications for iOS, Android, Mac, Windows, Linux, etc. is a cakewalk for businesses. LITERALLY!

Fast forward to May 2021 – Flutter released its revamped version, Flutter 2.2 which is armed with incredible new features and capabilities.

So, what’s new in this update? And most importantly, how these new updates in Flutter can impact business applications?

What's New in the Latest Flutter 2.2?

To build the best UX with Flutter, it's essential you stay updated about the latest Google offerings on the Flutter development services.

Here's a list of the latest feature updates in Flutter 2.2.

Dart’s Null safety is one of its stunning productivity features. With this, your development team can avoid running into frequently encountered null errors — bugs that aren’t often easy to spot.

You’ll be pleasantly surprised to know how widely Null safety feature is adopted amongst Flutter developer’s community. A few months into its launch, 93 percent of the 500 top-most popular packages on Google’s pub.dev started supporting null safety.

With Dart 2.13’s updated Null Safety feature, null safety will be enabled by default, and you'll be able to build all your Flutter projects without any worries.

This feature allows the developer to create a new name for the existing type. The developer can then use that name anywhere in the app code where the original type is expected to be used.

It is truly a liberating step for the Flutter developers.

The developer finds it easy to give a shorter or descriptive name to a type. Moreover, It is easy to understand, and the application code becomes a lot more readable.

In the previous versions of Dart, the users could create type aliases for functions. But now, in Dart 2.13, Flutter extended its use elsewhere, especially to variables used in the code.

This one’s a great benefit if your Flutter app has a performance-critical code that would work best if written in a different language like C or C++. Or when you’re required to link a specific external binary shared library to your application code.

The FFI, or Foreign function interface, involves code written in Dart interfacing with a different language like C or C++.

Developers using the previous version of Dart could integrate it with native code in the beta version only. However, with Dart 2.13, Dart FFI gets available on the stable channel, making the developers use it without limitations.

How the new Dart 2.13 will impact your business?

With an updated null safety, your developers can eliminate an enormous class of errors from your application’s code.

Moreover, with additional updates in Type alias, FFI, and others, memory space occupied by a Flutter program reduces, improving its performance.

What it means for you is – reduced app size, minimized null-error crashes during testing, and increased app performance.

As part of making Flutter’s integration with Google’s ecosystem tighter, Flutter 2.2 has come up with a new payment plugin with the help of the Google Pay team.

With this feature, Flutter developers will find it easier and faster to integrate in-app purchases into apps.

In addition, the new payment plugin will help build an application that accepts payment for goods on both Android and iOS platforms.

How will the new Flutter Payment Plugin impact your business?

This is a revolutionary step towards monetizing your app and doing it super quickly.

In its new avatar, Flutter has ventured into areas that weren’t as necessary on mobile form-factors as they are on desktop form-factors. One of the said areas is text handling.

The Flutter 2.2 has refined text handling and extended its support to several platforms with different input types. In addition, you can override some default actions and provide new actions to keystrokes of your choice.

What do the custom text actions of Flutter bring to your business?

This feature of Flutter brings endless possibilities for you.

Your app users will get an intuitive experience whether they’re working on a mobile or a desktop.

Besides, you are now free to customize the app keystrokes linked to different text actions. For example, it allows the application users to send a message with the pressing of Enter key or probably insert a line with the help of keystrokes CTRL+ enter.

Scrollbars in Android and iOS applications do not show by default. On the other hand, for a desktop app, a scrollbar is shown when the content becomes bigger than the container.

Flutter developers previously relied on adding a Scrollbar parent widget to the code.

The new and updated Flutter release automatically adds a Scrollbar to the app as and when necessary. This is a significant relief for the app developer as they’ll not have to worry about adding a widget to the code.

Moreover, if you do not like the way the scrollbar looks in your application, you can set a ScrollBarTheme of your choice. Finally, if you want to change the default scrolling behavior, you can change it across the app or on a specific instance with the help of ScrollBehavior.

What the automatic scrolling behavior of Flutter2.2 brings to your business?

There are a few areas where this feature is beneficial for businesses.

In the previous versions of Flutter, you could easily hover a mouse cursor over a widget, indicating it was clickable.

However, you often ran out of luck whenever you attempted to do the same with rich text having different text spans, styles, and sometimes long enough to wrap.

That was because TextSpan is not a widget.

But with Flutter 2.2, this is very much possible.

This simply means you can have wrapping text spans the way you want, and text with recognizers will get the required mouse cursors on hovering the mouse. What the mouse cursor support of Flutter2.2 brings to your business?

You may consider these tiny changes, but they play an essential role in making your Flutter app feel just as its user expects it to.

Flutter 2.2 adds many new and unique material icons to the Flutter programming. It makes the total number of material icons to 7,000 plus. In addition, flutter app development allows you to search for the icons by name and category at fonts.google.com/icons while describing how to use them.

What does this mean for your business?

Flutter 2.2 brings a new optimized caching behavior for web apps. It is done by fixing the double downloading of main.dart.js.

Earlier, when the new service worker downloaded any change, the user would have to refresh the page a few times to see those changes. But this is no longer needed in the new version.

So app users can observe the updates without the need for any manual refresh.

There is an improvement in web renderers with:

Why You Should Use Flutter for Cross-platform App Development?

Here’s why Flutter is the best app development solution for you if you’re looking to build a cross-platform application.

Flutter can get you two mobile apps for the cost of one. Literally!

Instead of building two separate native apps for your iOS and Android users, use Flutter to create a single cross-platform app and save cost.

Moreover, you don't need to employ a big, expensive team comprising of Android as well as iOS developers - just a couple of engineers on the team will do.

Many Flutter features improve the app development time and help build an app in the shortest time span.

This feature enables the developers to keep track of changes made to the code almost instantly.

Single Codebase is Flutter’s ‘write once’ feature – an excellent one at speeding up the development process. With this, developers don’t have to write a range of codes for diverse platforms – iOS or Android. Besides, the speed of testing and QA process also increases.

These features make Flutter the right choice for anyone – whether they’re a startup or an enterprise, or whether they’re planning to build an MVP or a full-fledged mobile app.

Flutter has overcome the app performance, and UX challenges that other cross-platform frameworks face.

Moreover, native features such as navigation, scrolling, and more, make the apps look consistent across all platforms.

If you’re looking to build consistency in your mobile app UI across platforms, go Flutter. Flutter helps you design eye-catchy UI and improve the visual aspects of your mobile apps.

Also Read: Ionic vs. Flutter: Which One to Choose for App Development?

Flutter is not only an excellent toolkit for building mobile apps, but it also provides great support in developing web and desktop apps.

Developers can use Flutter web, which is a code-compatible version of the software development kit (SDK). It generates the web content rendered using commonly used HTML, CSS, and JavaScript.

On the other hand, Flutter desktop empowers developers to compile Flutter code to a Windows or Linux desktop app.

Enterprises looking to provide seamless user experiences to their mobile, desktop, and web app users can completely rely on Flutter.

Flutter offers an assortment of widgets that are fast, extensive, and customizable. In addition, they come with the capabilities to build the best applications possible. Independent of the gadget’s screen size, flutter widgets provide a natural look and feel to your app.

With improved support, Flutter’s usability has expanded to not just apps with different form factors – like mobile or desktop, but also with varying types of input – touch, mouse, or keyboard.

Other reasons why you can rely on Flutter

Businesses everywhere are happily adopting Flutter for application development. There are many reasons for this.

You can safely consider Flutter as the best way to deliver a well-performing cross-platform mobile application.

Flutter is one of the quickly-growing, cross-platform app development platforms available today. It is backed by Google, which means continuous improvement and evolution and great documentation and references.

Go Flutter if you want beautiful, intuitive, lightweight, and scalable cross-platform apps at a limited cost and time.

If you’re looking to build an app in Flutter while reducing the turnaround time of your time-critical projects, get in touch with us.

What's New in the Latest Flutter 2.2?

Why You Should Use Flutter for Cross-platform App Development?

2. Why use Flutter for cross-platform app development?

Here’s why Flutter is the best app development solution for you if you’re looking to build a cross-platform application. 1. Budget-friendly 2. Faster development 3. Native-app performance and experience 4. Consistent UI across platforms And so on. Read the full guide to learn more.