From Pocket Watch to Apple Watch: How Technology Has Innovated an Everyday Item 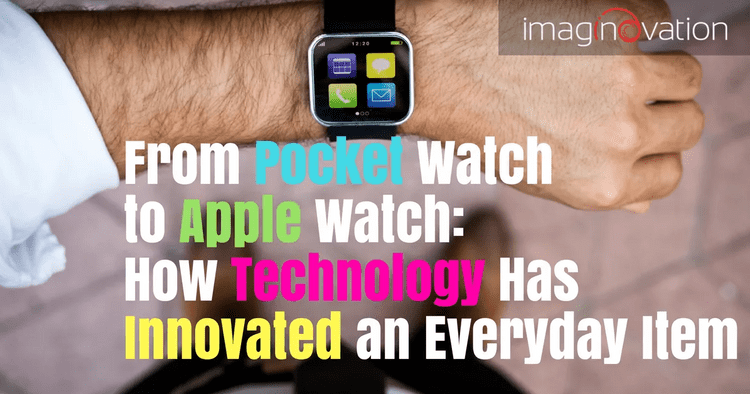 In 1998, while having lunch with a friend or in a meeting, you might check the time. To do so, you probably glanced down at your wrist. In 2016, you were far more likely to pull your smartphone out of your pocket, purse, or bag to accomplish that goal.

Today, with the smartwatch evolution you might be once again looking at your wrist — and then checking a text message or email at the same time on your smartwatch. But having come so far, have we actually stepped backward?

Watches have been around for centuries; the first recorded reference to a “pocket clock,” was in 1462. People wanted to keep track of time more accurately while they were moving around. Like today, manufacturers worked to create the technology in smaller and smaller sizes to fit in the interior pockets hidden within clothes at the time. In later years, women sometimes wore pendant watches. By the late 17th century, pocket watches became an accessory and were seen tucked into smaller waistcoat pockets. Soon, watches were offered as fancy jewelry as well.

These early watches weren’t reliable; the first ones only showed the hour, and even after a minute hand was added later, you couldn’t guarantee its accuracy. The railroad industry stepped into the timepiece business after a train crash in the 1800s caused by an engineer’s slow watch and his failure to use it. (The railroad industry also helped us standardize time.) Pocket watches thereafter continued to improve in both appearance and accuracy, also thanks to improvements in manufacturing, and were soon carried by the masses.

The wristwatch (bracelet watch) first hit the scene in Europe in the early 1900s and was considered highly fashionable, mostly for women. Americans were puzzled by this trend and considered it a fad at first. But the wristwatch appeared on battlefields in the Second Boer War. By the time World War I broke out, wristwatches were a must-have item for American soldiers, too. Civilians soon followed suit, enjoying the practicality.

Wristwatches soon became the norm. They emerged in a variety of options from the basic and practical to the luxurious and fashionable. Technology has always looked for ways to improve upon them, making digital versions, adding options for alarms, different time zones. But the overall necessity and function of the watch remained.

Until one day, the smartphone changed all that. Telling time is, of course, not the primary function of a smartphone. A smartphone is your Internet connection, calculator, watch, alarm clock, library card, newspaper, and far more.

Reports soon began to indicate that the smartphone has eaten into sales of wristwatches, especially the luxury brands. If my phone can tell me the time, why wear a watch?

Once seen as a far more practical way to ascertain a simple fact, watches now feel duplicitous as you go about your day. You’re already pulling out a device to manage many other tasks; you’ll no doubt glance at the time while you’re there.

But is this progress? The wristwatch, amusingly, was invented to save the time it takes to pull a device from your pocket or bag. Now, not only have we regressed, we’re further impeded by this clunkier object and probably distracted by a notification. You might even pick up your phone intending to check the time and forget completely.

Today, we’re back to the wrist, though now this device can read you a text message, too. Much as the early wristwatches were fancy jewelry, a smartwatch is a status symbol. But the wristwatch’s role as a status symbol may be the very thing that saves it, according to Business Insider.

We began tracking time eons ago to manage our lives. Today’s world could not exist without a way to tell time. Maybe, soon, we’ll realize that once in awhile, you just want to look down at your wrist to figure out that it’s time for your next meeting — without the distractions of endless possibility.