The Psychology Behind Effective Gamification in Apps 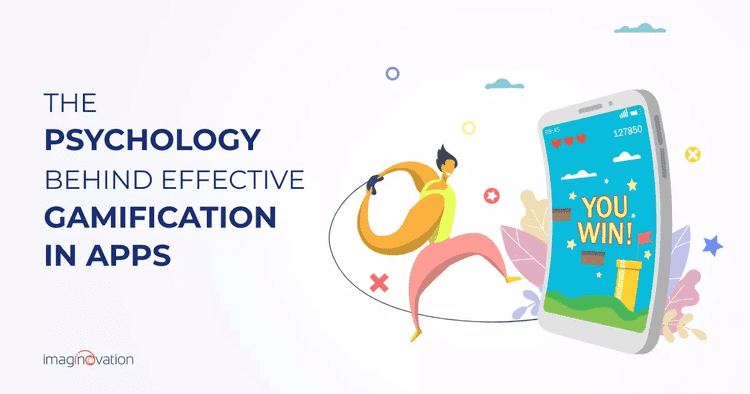 One of the biggest challenges apps face is attracting and retaining users. Even if the app provides a lot of value to users, it's tough to get users to install them and stick to it. When most apps rely on their users for revenue, user retention can make or break an app.

Some of the most successful apps have found a way to quickly grow their user base and retain them: gamification.

By gamifying apps, developers make them more attractive to their users. Because even if nobody wants to go for a run in the morning or check their financial status regularly, everyone loves playing games.

This blog post explores gamification and the psychology behind it that drives users. Dive in to learn how you can grow the user base on your app with gamification.

Gamification is a technique used to make events, applications, organizations, and others more interesting and engaging by incorporating gaming elements. It is a user engagement approach that uses different game elements in mobile apps.

It is also used to improve employee morale, productivity, and engagement and make people drive themselves. Many organizations have successfully employed gamification techniques among their employees to bring out their competitive spirit.

For example - 90% of employees say that gamification makes them more productive. Most organization use gamification by offering points for completing tasks and employing leaderboards to make teams more competitive. At the end of the year or a set period, employees may get rewards in the form of bonuses, company swag, or maybe subscriptions to services.

Many insurance companies have also implemented gamification within their services. Some offer activity trackers like Fitbit, and users get points when they complete challenges or hit their exercise milestones. If the users reach their milestones, the insurance companies may reward them with a day at a spa, a free health checkup, or discounts on insurance premiums.

Some of the best implementations of gamification take little effort from the users. While games are exciting, users don't want to make additional efforts to play them when using an app or a service.

For instance, if an organization offers rewards for its employees, it cannot expect them to fill out forms or track their points. It may be counterproductive and reduce their productivity. But if they can automate the whole process, employees will be thrilled to work towards it.

Gamification should also be closely tied to the action; users should see the results right after their activity to get good results. For instance, if an employee resolved a hundred customer care queries, they should be rewarded immediately instead of giving an award weeks later.

Why Does Gamification Work So Well? (Psychology Behind It)

Gamification is a proven strategy to improve engagement among users. It has improved engagement and productivity in workplaces and conversion rates for businesses.

1. It brings out the competition among users

One of the most common gamification techniques is using points and leaderboards to complete tasks or levels. Many applications — from Strava to MagicTask — allow users to compete with their global user base, friends, and teammates. In many organizations, the digital workplace is configured to let employees compete with their colleagues.

Gamification works well here because it brings out the competitive spirit among its users. Even if there are no rewards for the winners, just being on top of the game motivates users to put their best foot forward. Everyone loves a good race to the top, even if it's not the Olympics or Formula One.

2. It triggers the reward centers in our brains

Getting points or seeing their name at the top of the leaderboard triggers the reward or pleasure centers in the users' brains. These are the same regions that make us feel happy when we see our loved ones or have good food or win a prize. These regions trigger a rush of serotonin and dopamine, giving us a happy sensation and more energy.

These hormones strengthen the connections within our brains and make us associate happiness with completing a task or winning a competition. This makes the users want more of these rewards and motivates them to work for them.

3. It rewards behavior the developers want to see more

With gamification, developers can drive user behavior and make them direct their energies to these apps. For example, in a fitness app, the goal is to get users to work out more often and use the app for it. By rewarding the user every time they track a workout, they encourage them to do it more often.

In the case of a financial planning app, the goal may be to get the user to reduce their expenses or encourage them to make good investments. By showing a progress bar for their costs or playing an encouraging tone, the app can motivate the user towards this behavior. 4. People love being told how well they're doing.

Let's face it; we love a pat on our backs every time we do a good job. Even if we're independent and self-driven, it doesn't hurt to have external validation. Gamification drives and motivates users by giving them a pat on the back. For example, in many e-learning apps, users get a star or a token every time they complete a lesson. Even payment apps like Google Pay rewards users when they make a payment.

The best part is that, unlike in real life, the apps can offer support and encouragement right after they've completed a task or achieved something. Instant rewards are one of the reasons many companies use apps to motivate their employees instead of holding month-long competitions.

5. It lets users connect with others on the same journey

Many apps create communities or let users share their accomplishments with others. This is common in many fitness apps such as Strava and Samsung Health. Apps like Google Pay encourage users to share coupons or scratch cards with their friends.

By connecting with other users, these apps create a sense of community among them. For example, Strava shows users a feed of activities the people they follow are doing. Besides competition, it also motivates users with the desire to be a part of something bigger than themselves. The same reason that encourages users to join trends on social media makes them want to complete activities or reach goals.

Even the most valuable apps aren't often user-friendly. It may take users a while to learn how to use them before they start gaining value. The initial learning curve may drive away users just because it takes too much of their cognitive space.

But gamification simplifies the apps for them. Users don't have to worry about setting financial goals or going through lessons; they just have to win points. Even before they get any value from the app, they can still use it to have fun.

The idea here is that people would rather not lose a hundred dollars than win the same amount. This is the loss aversion theory and is commonly used in marketing and economics. In general, people don't like to lose things they have worked for; utilizing this principle, app developers can motivate users to stick on.

For instance, Duolingo lets users build streaks when they use the app consistently. But if they miss a day, they lose that streak and have to start again. This makes users want to continue using the app, at least for a few minutes, even if they're busy or on vacation.

Examples of Effective Gamification in Apps

Here are a collection of apps that have built and sustained substantial user bases and revenue streams with gamification:

Samsung Health is a fitness app that integrates closely with Samsung phones and wearables. The platform can track a ton of activities and offers users points when they finish them. It allows users to set their own goals and compete with their friends.

The app lets users challenge their friends to work out or meet fitness goals. Users who complete their fitness records get badges to mark their achievements. The app also allows users to share their workouts on social media.

The platform offers users points through a proprietary algorithm as they complete their tasks. MagicTask also has a leaderboard for users to compete with colleagues or other users.

MagicTask also has a lot of themes with their own UIs and animations. The themes level up as users complete their tasks and gain points, unlocking new animations and sound effects.

Google fit lets users track their workouts and keep track of their fitness journey. The app is available on android wear devices and integrates with many fitness and workout apps. The clever part about activity tracking in Google fit is that it simplifies all of the user's activities into heart points. Instead of tracking steps or calories, it compresses all of this data into one metric that users can quickly try to achieve.

Google Pay has extensively used gamification to encourage users to make payments on the app. When they launched the app, the app offered cashback every time users made a transaction. Once they built a sustainable user base, they started focusing on collectible cards and tokens, which offered more significant rewards combined. The app works with other stores to provide discounts to users when they make a purchase.

All social media apps use a form of gamification to encourage users to engage with them. On Instagram, this is in the form of likes and shares for content. Users are motivated to post more pictures and videos when they get instant rewards from their friends and admirers. The app has also successfully used funny filters to improve engagement.

Duolingo is a popular language-learning app with millions of users across the globe. The app lets users learn languages through fun self-paced lessons.

Duolingo offers badges to users as they go through their lessons. The platform also has its own in-game currency; users get these coins when they pass their lessons, and they can use them to unlock new lessons and get new outfits for their avatars.

The platform also has a strong community and leaderboards; users can compete with friends and other users on Duolingo.

As users finish lessons regularly, they build a streak that gives them more points. But if they miss a lesson, they'll lose the streak and have to start all over. They can also use the coins earned to maintain their streak if they need more time to finish a lesson on a day.

The Imaginovation team has years of experience building apps that users love and engage with. We build apps that drive and direct user behavior and create a consistent revenue stream for our clients. We've used gamification extensively in our applications and have successfully improved user engagement and retention.

If you are looking to implement custom in-app gamification, get in touch with us. We are an award-winning team of web and mobile app developers. Right from the design to development, our team can help you implement gamification and help improve your user's in-app experience.

Why Does Gamification Work So Well? (Psychology Behind It)

Examples of Effective Gamification in Apps