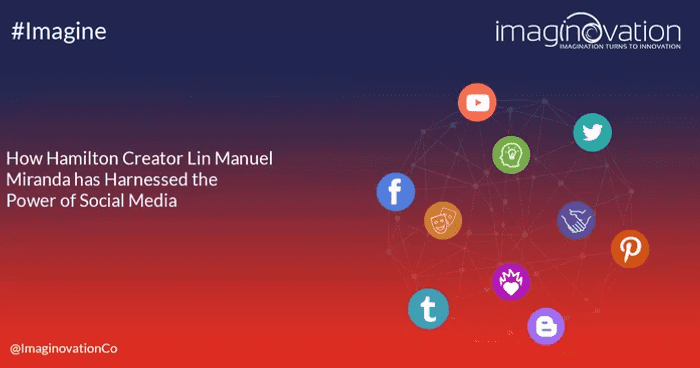 It’s been the hottest ticket on Broadway for nearly a year now – Hamilton. The raucous, diverse, political, innovative masterpiece of the incomparable and now infinitely famous Lin Manuel Miranda has gone from a show about a founding father to a cultural phenomenon that’s taken on a life of its own and catapulted its creator into the stratosphere. It’s won Miranda a Pulitzer and a shelf full of Tonys, a Grammy and a Drama Desk Award, the love of politicians and the love of celebrities, and it’s kept Alexander Hamilton on the ten dollar bill after he was set to be kicked off. This is theater with power.

Innovation on the stage and online

Lin Manuel Miranda does incredible things via social media to support his show and his message, showing that his innovation and passion isn’t limited to writing songs, spinning poetry or even performing on the stage and the screen. The internet is a place where new ideas and creativity are rewarded. Miranda offers up powerful lessons in how to reach an audience, how to connect with people and how to inspire them.

Here are lessons to learn from the mastermind behind the phenomenon.

Starting way back in 1996 with another Broadway phenomenon – Rent – shows have had a practice of offering up low cost tickets to shows on the same day of the performance for lucky theatergoers who come to the theatre. Hamilton has been sold out for its entire run, with the only tickets available today being via scalpers, who charge hundreds for a ticket. So while you might not be able to afford a regular ticket to Hamilton, some of the best seats in the house are available for a lucky 21 people who come to the theater on the day of the performance and win the lottery.

In addition, the cast soundtrack to Hamilton is available legal and free on YouTube through its distributor, Warner Music Group. That gives access to the music of Hamilton to a whole variety of individuals who might not otherwise be able to afford the soundtrack, or who would.

That kind of accessibility and respect for each and every fan is a key ingredient to Miranda’s success, online and offline.

On opening day, the buzz for Hamilton was already massive. When Miranda realized that there was a huge crowd outside, he did what all great performers do – he entertained them. He didn’t want those who couldn’t see the show to go home empty handed. That was the beginning of #Ham4Ham, which has proven to be a viral marketing gem as the performances are posted on the show’s YouTube channel. This pre-show show has allowed fans from all over the world to participate in Hamilton without having to travel to New York and the intimacy of the medium has proved to be compelling.

It started with songs from Hamilton performed by the cast, but morphed into something so much more. Miranda regularly brings in Broadway megastars to perform classic melodies – like Lea Salonga (the voice of Jasmine for Aladdin) with whom he shared a memorable performance of “A Whole New World”, for free, right there on 46th Street. The New York Ballet has made appearances, and just recently Miranda spearheaded a moving tribute to Muhammad Ali.

#Ham4Ham vaulted further into the cultural consciousness thanks to an interaction with Kyle Jean-Baptiste. Jean-Baptiste had recently made history by becoming the first black man and youngest man to portray Jean Valjean on Broadway in Les Miserables. Just two weeks before his tragic accidental death from a fall, Jean-Baptiste and Miranda had performed together for #Ham4Ham. The performance became a pop culture touchstone in the wake of the young performer’s death.

Perhaps the most compelling part of the musical itself is the marvelous innovation of the concept, the choreography, the sound, the staging, the costuming, the casting, the music and more. The bottom line is that Hamilton is a product that’s unlike anything that’s ever been out there. The core of any successful venture has got to come from taking a chance and moving beyond the norm. That could mean creating something wholly new, or more often it comes in the form of something like Hamilton, which takes concepts and stories that already existed but combines them in new ways that work together to manifest something totally new and different.

To add to the innovation, Miranda has appeared on a wide variety of outlets that have powerful online presences. Jimmy Fallon, Carpool Karaoke with James Corden, Emma Watson with #Heforshe and the White House to promote art in schools. During these appearances he doesn’t just do a normal interview, Miranda creates improvisational art and memorable experiences that play beautifully online.

Lin Manuel- Miranda has proved to have a combination of passion, personality and intelligence that wows everyone who interacts with him. He is a charismatic figure at the center of this phenomenon. To understand more intensely how Hamilton and Miranda work together, check out the Twitter numbers of Hamilton vs. other social media juggernauts.

In all of these examples, it’s clear that it’s the person who is at the center, not the organization or the creation. It’s the force of personality, the passion and the engagement with a real person that drive people to interaction on social media. There is a personal touch that comes with social media that is clearly connected to a real person. There’s also naturally a more human interaction to this ethereal medium when it’s attached to a person.

Social media, like Lin-Manuel Miranda’s, that’s driven by personal experience is valued on the internet. His Twitter feed is brimming with insight, connection and interaction with the online world. He responds to individuals and is honest about his experiences. The exuberance of his show and his passion are evident through social media, which could be similarly said for the others on the list.

In the world of social media, it can be incredibly tempting to give away the milk without selling the cow. Holding back is a good thing though, particularly when it comes to preserving the integrity of a product or a service, or in this case a piece of art. Miranda has said no to a movie right now, though he says that is on the distant horizon. He’s refused to have his show performed outside of its home in the theatre, which meant that the Grammy performance in February had to be broadcast instead of being live in LA.

The fever over this thing has come from a tiny handful of people seeing in on Broadway, then teasers that have come through the soundtrack and a few tidbits of online footage of the show. Miranda knows when to push forward and when to hold back, how to lay bare his soul while still keeping the audience intrigued. Thus far his integrity and determination have been well rewarded.

It’s been widely reported that Miranda will be leaving Hamilton later this summer as he pursues movie deals and further promotion of his musical, just as the national tour kicks off. It has been confirmed that #Ham4Ham will continue when Miranda leaves the production, but will the magic still work without the creator there every day? Given the power and connection of social media and the massive appeal of this show and its creator, the answer can only be yes.

Innovation on the stage and online