Ionic vs. Flutter: Which One Should You Choose for Mobile App Development and Why? 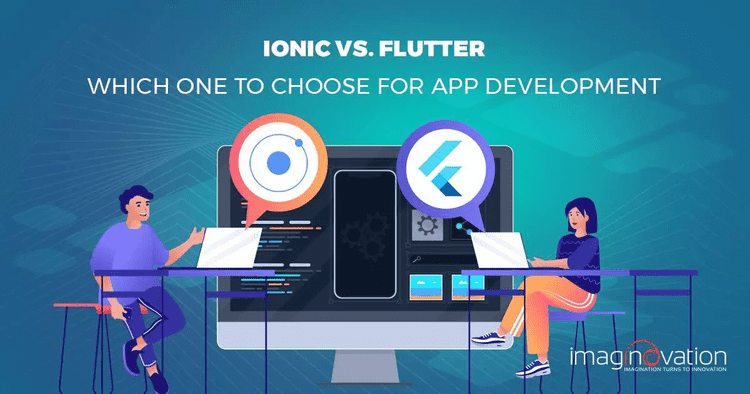 Ionic or Flutter, which one is the best for app development? Both Flutter and Ionic are used to build amazing cross-platform applications.

However, appreneurs may often find themselves in a dilemma on the platform selection. So, how to know which platform will be suitable for your application?

Well, it’s fun to explore the features, pros, and cons of both platforms before building your app. Plus, you may consider weighing the subtle differences between Ionic and Flutter and plot down the pros and cons.

For those who are excited to know the trends of Ionic vs. Flutter, this blog has some exciting insights for you. Keep reading—as we guide you on which framework is right for you.

Ionic vs. Flutter: The Key Differences

When it comes to developing any mobile app, it is critical to think of performance. It’s a no-brainer why high-performing apps are downloaded more and why users are glued to such apps.

So, if your app isn’t performing well, you are likely to have dissatisfied users, and you may end up losing valuable customers and ROI. The underlying framework used to build an app plays a crucial role in the performance.

Ionic Framework —is great for cross-platform app development as it can be used on multiple platforms using a single code base. For those who wish to build hybrid apps for web, native iOS, and Android platforms, Ionic can get you some brilliant results.

Here are some factors to consider when choosing the best framework for your app development.

Ionic uses web technologies, including JavaScript, HTML, and CSS. Plus, it requires a Cordova plugin to wrap the applications in native containers.

Flutter (as mentioned) uses Dart language, which is an object-oriented and multi-paradigm programming language. Dart is typically used for building apps for mobile, web, and desktop.

Often performance can be a critical factor when choosing the best framework. However, you must know that performance depends on many factors, including efficiency in code writing and more.

Ionic delivers excellent performance. However, Flutter has a slight edge as there is no native transition to connect with the native environment.

Flutter is relatively new, which makes it slightly less mature than its counterpart.

4. Architecture and Execution of code

Ionic extends the benefit of code reusability with one codebase. Its robust features and powerful community support facilitate developers to develop highly interactive apps in good time. One can also use Ionic with JavaScript, Angular, React, and Vue.

Flutter is an advanced and comprehensive language. With its engine, it can connect with platform-specific SDKs. The facet gives developers an exciting, reactive, and rich set of features that can boost mobile app experiences.

Ionic is tremendously popular among web and mobile app developers because of the easy learning curve. Some tech giants using it are Pacifica, Nationwide, Sworkit, MarketWatch, and more.

Flutter is growing in popularity. It is used by Google Ads, Hamilton Musical, Alibaba, etc.

When to Choose Ionic for App Development? Here’s the critical question: when to choose these frameworks? What is the best and when to use it?

Well, there isn’t one single answer to it.

At the core, one must understand that since each app requirement is distinct, one must select the framework that aligns with your business vision.

Ionic use is a wise call when one has strong developer expertise in using web technologies and Angular. Plus, when developers have experience in various JavaScript and Angular libraries, Ionic can augment the mobile app development process.

Ionic can help deliver an MVP, prototype, or demos for those who are looking at short development timeframes or excellent prototyping capabilities.

On the downsides, one needs to work more on security and optimization measures. Plus, if you are looking at developing mobile games or other applications that require extensive use of phone hardware, Ionic may not be a good idea.

Here are some other excellent reasons when you may want to choose Ionic for app development.

The bottom line, choose Ionic when developing hybrid mobile and web apps with great native power and control, with first-class support for PWAs.

When to Choose Flutter for App Development? Now, let’s look at when you may choose Flutter for app development. Here are some compelling reasons:

The bottom line, choose Flutter when you are looking to develop a performant and scalable native cross-platform app in limited time and cost.

Flutter vs. Ionic: A Quick Comparison

Here’s a quick capture of the various parameters before choosing a framework.

Flutter vs. Ionic performance for app development is one tough decision, but when you weigh the parameters, it may help make an informed decision.

Ionic and Flutter are excellent technologies when it comes to building cross-platform apps. While each has its strengths, similarities, and differences, you still need to make an informed decision.

Creating game-changing, high-performing apps that can serve your target audience and get your revenue churning is fun.

Firstly, you need to choose a solution that meets your vision and aligns with your business philosophy. While you may look at trends, the best industry practices, and successful use cases, it is good to look at your core strengths.

It always helps to choose the development approach that you and your team are convinced can get you your winning app solutions.

For those who aren’t sure about making the decision, you can always speak to a proficient digital solution provider such as Imaginovation, who can walk you through the app creation journey.

It’s time you build a pathbreaking digital solution with the framework that keeps you ahead with changing tides. Before you get carried away, make your decision; get started!

If you want to create cross-platform apps that are fast, scalable, and high-performing, reach out to us to do all the heavy lifting. We can help you through all the stages of planning to deployment, significantly reducing mobile app development costs.

We are an award-winning web and mobile app development company in Raleigh with incredible experience working on niche technologies. We know what is critical to successful app development and user engagement.

Book a meeting with one of our team member and we will help you plan out your next steps. You can also use our project cost calculator for ball park estimations on your new project.

Ionic vs. Flutter: The Key Differences

When to Choose Ionic for App Development?

When to Choose Flutter for App Development?

Flutter vs. Ionic: A Quick Comparison

1. When to Choose Ionic for App Development?

Ionic use is a wise call when one has strong developer expertise in using web technologies and Angular. Plus, when developers have experience in various JavaScript and Angular libraries, Ionic can augment the mobile app development process.

2. When to Choose Flutter for App Development?

Choose Flutter when you are looking to develop a performant and scalable native cross-platform app in limited time and cost.