#TBT: What GeoCities Taught Us About Building Websites 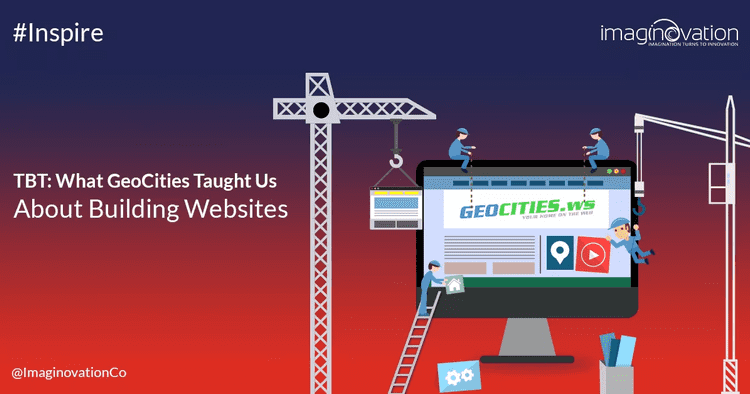 The Internet of today represents a beautiful evolution of technology combined with human interaction. Those of us who were there when the Web was something totally different, a new and exciting frontier to be explored and created all on our own, can attest to how incredibly different it is today from what it was back then.

Understanding our roots online is a powerful way to propel us forward for the future. We have a lot to learn from the places that we’ve come from.

GeoCities was the first widely adopted and accessible platform on the Internet to give a wide swathe of users the ability to create their own reality online. It was how many of those early innovators first were able to dip their toes into site generation. Today this is something that we take for granted, but back then it was a big deal.

Spoiler alert – GeoCities is no more. In 2009 it was officially shut down everywhere but in Japan.

Now that we know the ending, let’s flashback fourteen years to 1995, when GeoCities was first created by an Internet hosting company in Southern California called Beverly Hills Internet (BHI). At first it was a local page, with “neighborhoods” like RodeoDrive and WestHollywood. That neighborhood concept proved to be hugely important to the success of the site. At first it was a standard site, not too terribly different from what was elsewhere on the Web at the time. The game changer came a few months later when BHI opened those neighborhoods to “homesteaders,” independent users who could create their own Web pages. The concept proved to be revolutionary.

The growth of BHI and its transformation into GeoCities is one of those magical early Internet tales. Thanks to an idea, the company grew dramatically in an incredibly short period of time. Within just a couple of years it had changed from a local Internet provider into an international company with bicoastal offices and millions of dollars in revenue.

Large companies like Yahoo! began to invest in 1996 as homesteaders spread across the globe and the structure of the site went from locale specific neighborhoods to broader and more diverse neighborhoods that catered to the now international flavor of users. Thousands of homesteaders signed up every single day, with daily views exceeding six million. In mid-1997, GeoCities signed its millionth homesteader and introduced paid advertisement. A year later the company went public, making everybody rich. In 1998, it was ranked third in Internet visits, behind behemoths Yahoo! and AOL.

This is all in the span of three years.

Yahoo! bought GeoCities in 1999 to the tune of over $3.5 billion in stock. Yes, that’s billion with a “b”. However here’s the beginning of the end. No one liked the Yahoo! takeover, and users began to stream away as quickly as they had poured in. Why? Yahoo! got greedy. Where before GeoCities had been a user driven platform, Yahoo! changed the user agreement to say that it owned the content, not the users. There were other changes as well, including the removal of the “cities” idea in favor of username urls, and mass changes to the premium service. Speculation that the site was shut down began as early as 2001, though it proved to be a slow and painful death that didn’t officially happen for another 8 years when the paltry remains of the site were subsumed by Yahoo!’s hosting service.

What did GeoCities teach us?

There were some amazing aspects about GeoCities that set it apart from everything else on the Web, and that truly made it the grandfather of everything that has followed.

Lesson: People want to be active participants in the creation of the Web.

GeoCities offered users this extraordinary ability to create websites. Previously there had been literally nothing like it. It was easy. It was accessible. It was personal. It was ours. Before GeoCities, the Internet didn’t really belong to the people. After GeoCities, no one could take it away from us.

Anyone could make a basic page, but then the site also offered users the ability to delve deeper and to make even more of their website as they learned more and their skills improved. The whole thing was completely up to the user. The legacy of user generated content can be seen today in places like PageCloud, a Web design killer that lets users take part in the Web in more meaningful and dynamic ways than social media. Like GeoCities, users can create the look and feel of their own website, sharing their viewpoint and passions with the rest of the world.

For the first time, GeoCities let the people be the creators of the content on the Web. We were no longer consumers, but producers. That’s really been the driver for the Internet revolution that’s followed – people don’t want to just listen, they also want to be heard.

Lesson: People want to connect with others who are likeminded.

There was also this whole neighborhood idea. You could connect with people who had the same interests. It was most definitely a precursor to social media, particularly as chat rooms and messaging evolved later in its development.

We learned that in order to make a mark in the world of the Internet, you had to be distinct even as you found your niche of people. More and more that’s what people want today, to be a part of a group while retaining their individuality. In fact, the Internet truly has become this hodgepodge of “neighborhoods.” Everyone connects through social media with the modern versions of Area 51, TimesSquare, Leftbank, CollegePark or Hollywood. Then as now, the most popular sites were about bands or shared hobbies. GeoCities represented a broad version of that idea, where today users want micro interactions that are catered to them and give them at the very least an illusion of autonomy.

GeoCities was a friendly environment

Lesson: User Experience/User Interface has always been of primary importance.

GeoCities was the first place on the Web to allow each individual to determine their own place in the world and to the have a part in molding that place into what they thought it should be. It proved to be a testing ground for young Internet junkies, who found out that they could more effectively connect with others through killer Web design. We learned that while the content was important, so was the style of its presentation.

Not only was it absolutely essential that GeoCities was a user friendly platform in order to draw users to the site itself, but then once inside it was important that users learn to create compelling and accessible content for readers. This is where we learned how to attract people to the Web through fonts and colors, animations and images. It was the beginning of the user being the boss.

While it’s tempting to ruminate on the loss of what was a wonderful community online, in addition to being the absolute progenitor of the Internet world as we know it, it’s really ok that GeoCities has come and gone. The Internet is about constant innovation, in fact that’s one of the things that we love most about it.
If all of this nostalgia has you chomping at the bit to dig deeper into memory lane, have no fear. Much of the Websites that inhabited GeoCities were archived by diligent Web lovers. Check out ArchiveTeam for the chance to enjoy and learn from the place that so many have fond memories of, when we were the creators of the first wave of the user generated Internet.

What did GeoCities teach us?

GeoCities was a friendly environment