TBT: What MySpace Taught Us About Social Media 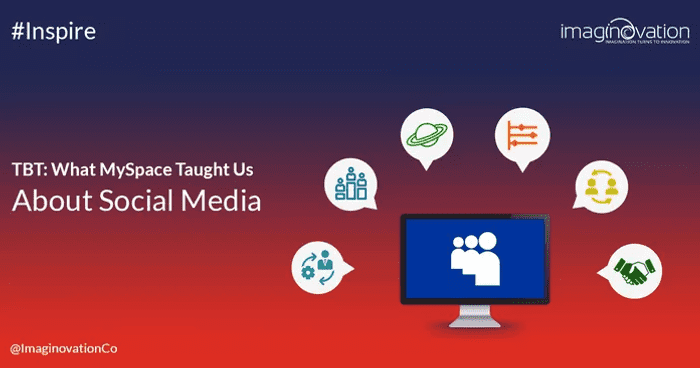 The available of the Internet changed the world by allowing people to connect in ways they never have before while simultaneously giving everyone a voice. Suddenly you didn’t need to have a lot of money to share your ideas. You didn’t need to be connected with powerful people through the media in order to have a platform for your voice and to reach millions. There was a space for you. In the beginning that space was MySpace.

MySpace wasn’t the first social media site on the net, but it was the first to really take hold of the popular imagination. The site came into fruition in 2003 out of the ideas of employees at eUniverse who wanted to capitalize on and expand the Friendster model of social interaction online. Where Friendster was focused on gaming as its central theme, MySpace would be an open platform that allowed anyone to participate and converse on a wide variety of topics. With 20 million subscribers already signed up for eUniverse, it didn’t take long for the concept to take hold and begin to grow. That growth was fed by the ready-made back end support that existed at eUniverse, which meant that everything from finances to tech support to user reach were already in place for MySpace. This led to skyrocketing numbers of users in a short amount of time. Early on there was some discussion of moving the service to a paid platform, but it was nixed in favor of an open platform to attract more users. That openness proved to be a fouhttps://www.imaginovation.net/blog/6-ways-to-build-user-engagement-through-social-media/ndation for all the social media that followed.

In 2005 as MySpace dominated the social media market and was sold to Rupert Murdoch’s Newscorp for $580 million.

By August 2006, MySpace signed its 100 millionth user. It continued to be the biggest social media platform on the market for another two years, consistently increasing traffic. By the end of 2008, the site was valued at twelve billion dollars. Unfortunately, that preeminence didn’t last. Interestingly, it was in part the inability to attract older users that contributed to MySpace’s decline, as the site began to hemorrhage younger and more finicky teens and college students to other platforms. There was also a significant social aspect of MySpace’s decline, as it began to be perceived to be a seedier and less safe version of its rival Facebook. Vandalism, malware, spam, phishing and scams were never fully addressed by MySpace, leading to further tarnishing of its image.

MySpace responded to the losses with redesigns and refocusing, mostly centered around honing itself as an entertainment and music platform. Unfortunately, it didn’t take off and user numbers fell below 40 million. Newscorp sold MySpace for a paltry $35 million in 2011 to Justin Timberlake, who transformed into a more music centered site, which makes sense as music was always a core part of its function. Today it looks wholly unlike its original self, with the loss of blogs, private messages, gaming, comments, posts and custom backgrounds for users. Instead, there’s heavier focus on editorial content and band pages. Just this year it was purchased by Time Inc.

What did MySpace teach us?

MySpace was the pioneer in social media. It was the gateway for a whole generation into the world of online interaction, fueling a revolution in life online. So many of the standards of social engagement that we take for granted today exist because of MySpace.

Lesson: Monetizing doesn’t have to come from paid subscriptions

A defining aspect of the social media phenomenon is that it’s free. Being free means that everyone has access. More access equals more engagement. Platforms have to have a broad enough base that people can actually connect with others that they know, otherwise what’s the point? Being free allowed MySpace to reach a much wider audience, which led to more users and opportunities for advertising revenue.

Lesson: People want to put themselves out there

Who would have ever thought that people would be willing and ready to post intimate details of their life online for all the world to see? MySpace taught us that people do indeed want to put themselves out there. It was the first time that individuals connected through the Internet to a wider community of people who they interacted with in real life in a way that wasn’t a conversation. We became observers of each other as we poured our hearts out onto the screen for anyone who was willing to listen.

MySpace let us rank our friends

Lesson: Ranking people isn’t all it’s cracked up to be

The “Top 8” was a core feature of the MySpace experience. Though you might have hundreds of friends, the top friends were right there on your front page. There was nothing egalitarian or easygoing about this list, which made or broke countless relationships. As social media has moved forward, no other service has retained a public ranking system like the one that was on MySpace. Facebook does allow you to categorize your friends (Close Friends, Friends, Acquaintances), but these “rankings” aren’t public.

MySpace was a place to make “ours”

Lesson: Personalization is key to the social media experience

Perhaps the coolest thing about MySpace for users was the ability to personalize the space. There was a great deal of autonomy within the platform to make it your own while still maintaining the basic format and function of the platform. Everything was familiar no matter whose profile you were on, but with enough chance to customize it. Early users could even manipulate the HTML. MySpace brought the profile picture to the masses and allowed users willing to invest the time a broad vehicle to make the place their own with fonts, gifs, images, backgrounds and text. We see the legacy of that personalization everywhere on social media today, with platforms pushing the boundaries of customization while working to preserve the structure that breeds familiarity.

MySpace was low on interaction

Lesson: People want to talk with each other

The reason that brands were so successful on MySpace was because it wasn’t a conversational platform, its structure was more conducive to being a mouthpiece rather than a give and take. Where modern forms of social media are centered on interaction, MySpace was centered on individual pages. In particular this model was great for musicians, who could offer their product right there. Users didn’t have that same kind of offering, so going to their pages wasn’t as fruitful and eventually became a non-starter as people began to figure out that what they really wanted out of the online experience was a coffee shop where they could interact with their friends rather than a book where they could look at what their friends were doing.

Though there’s definitely a great deal of voyeurism as part of the social media experience today, there is the opportunity for interaction if we want it, which MySpace didn’t foster as well as its later counterparts.

Though MySpace may be a shadow of its former self, flattened by the onslaught of more innovative competitors, it remains nonetheless a wonderful first foray into the culture shifting power of social life on the Web. It was revolutionary for its time, even though when we take a moment we realize that that time wasn’t so long ago. It’s been less than fifteen years since MySpace launched, rose and then fell. That’s an incredible timeline.
Thanks for teaching us what it meant to have an online persona. Thanks for letting every person have a voice. Thanks for shaping the world. Thanks MySpace, for being our first space on the Internet.