The iPhone Eleven Years Later, from Humble Beginnings to Now 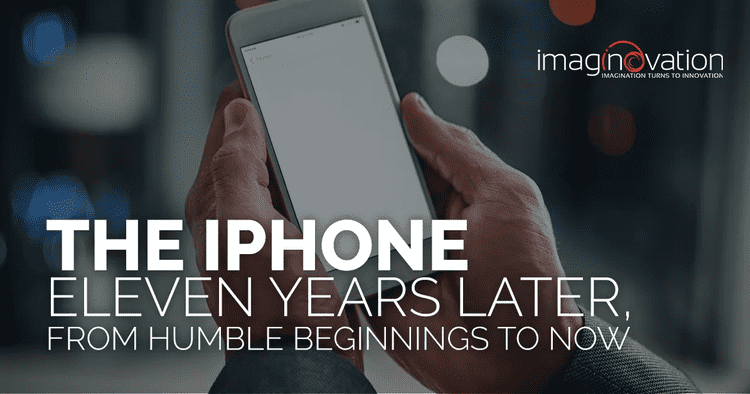 Eleven years ago, Steve Job made a bold statement: that a physical keyboard and touch screen and stylus were not the best way to approach a smartphone. He proposed that our fingers were the best stylus possible. With this statement, he introduced the “pinch and zoom” concept that we all know and love. A person now not only needed a phone to call, but also text, email, stay connected, access the internet and have a bit of fun. His pitch was a revolutionary concept in early 2007, and the result changed technology and the way we think about it.

The iPhone you have in your hand or on your desk right now was not always how the iPhone looked and behaved. The iPhone was exclusive to AT&T when it originally came out because it couldn’t work on the other networks. The first iPhone’s display was 3.5 inches, and its resolution was 320 x 480 pixels. Its rear camera only had a 2-megapixel resolution and didn’t even include a front camera. Apple sold 270,000 iPhones the first weekend it was out, and the era of the iPhone officially began.

Although the first generation iPhone was revolutionary, the device had some glitches, as newer technology does, so Apple worked to put out the iPhone 3G, which was released around a year later. This version was much faster, but sold for less than the first generation. The most significant addition to the 3G iPhone was the App Store. An online store created an entirely new market and career path; App developers could now reach millions all over the world.

These first two phones were revolutionary, but from here Apple stuck to evolving the iPhone to make it better and better. After the 4 came, the iPhone 4S added a more powerful processor. Designers were out to improve the revolutionary device they had created. With every release, they added more gigabytes, better cameras, and even the selfie camera.

This brings us to 2017, when Apple decided to try and change the game again and separate themselves from the other smartphone companies who had now caught up with them. They released the iPhone X, which got rid of the home button and relies on face recognition software. The display is 5.8 inches, and its resolution is 2436 x 1125 pixels. Who knew that a smartphone could change the way we live? Suddenly everything could be done on one device: call, text, email, GPS, games. The iPhone enabled you to be connected all the time. Before you’d have to get out your computer in a space that had WiFi and wait for it to connect; now you’re always connected by the cellular network when WiFi isn’t around. Here are some things the iPhone revolutionized — for good or for ill:

What’s Next for iPhones?

The iPhone hit the world right at the right time, during the rise of social media. The device revolutionized the way we do everything: the way we talk, shop, eat, and even drive. We can now speak to a friend while ordering takeout, then click a screen to ask a ridehailing service for a ride. We can do this from the sidewalk or our living room.

So what’s next for the iPhone or any other device? As voice-controlled devices begin to invade our lives, our uses for smartphones are changing. Even as smartphones continue to improve, some say the smartphone’s death is on the horizon. Technology makers are working to create “standalone augmented-reality headsets, which project detailed 3D images straight into your eyes.” That leaves not only smartphones obsolete but possibly televisions and every other screen as well.

As this new world approaches, it’s worth pondering whether any of this would have happened if it weren’t for the iPhone. No matter how you feel about our increasing dependence on technology, it’s incredible how one device changed the world forever.