This isn't the Enterprise Yet: What Tech is Missing Today 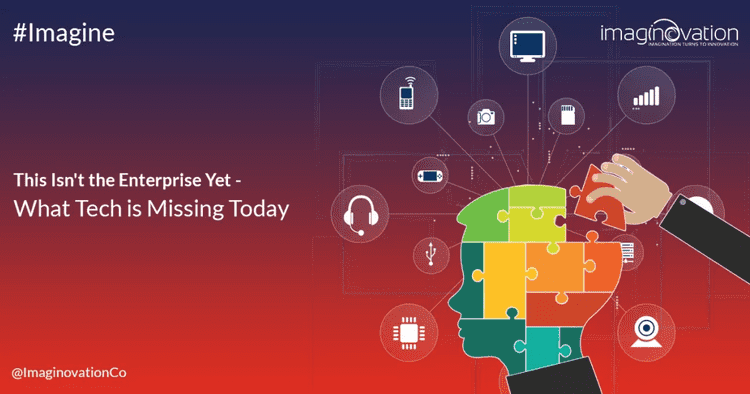 Despite its retro vantage point way back in the 1960’s, Star Trek’s sci-fi vision has inspired amazing leaps in modern day technology. There have been tremendous numbers of technological innovations first seen on the Enterprise that have come into fruition in the last two decades – from iPads to tricorders. But as we move forward toward a future that is more like that of Captain Kirk and Data, we continue to be missing fundamental aspects of the vision presented to us by Star Trek creator Gene Rodenberry. Those essential pieces of the puzzle represent a whole realm that’s just not coming together like it does in Starfleet and the Federation.

What is the tech of today missing out on? Here are five areas in which the tech of the 21st century doesn’t measure up to what we see in the fictional 23rd century and beyond of Star Trek.

1. Technology as a service, rather than all-consuming

The first big trouble spot that we find today is that somewhere we have been mastered by technology, rather than it being of a central service to us. Technology is almost a drug, something that consumes rather than serving. Kids are zombies in front of their tablets, and adults ignore the real world for social media.

Technology is ever-present, but never overwhelming to the people of the Enterprise. It’s something that’s repeatedly addressed throughout the various incarnations of Star Trek, with characters confronting the pitfalls of being surrounded by smart tech.

Today, there’s a real normalization of tech, the seamless interface of everyday life with computers. The trick will be to allow it to fade into the background rather than overpowering us.

2. Focus on human interaction, rather than virtual media

There is most definitely a sense that technology saturates the world of Star Trek, but it’s important to note that entertainment is still in the hands of people.

Uhura, Riker, Data and Spock all play instruments, creating real music rather than running to synthesized notes (no Guitar Hero in Star Trek). The holodeck is most often about facilitating human interaction. There’s an astonishing amount of live theatre. People play chess or poker together.

But in the real world, live entertainment is consistently losing ground to virtual. Social media, mobile games, streaming television, smart watches, etc. are all focused on keeping us busy. Tech is taking over the sense of human connectivity still shown in the utopian Star Trek world.

Note that it’s rare in Star Trek for anyone to sit alone in front of a screen. Interaction with technology is only valued insofar as it facilitates interpersonal interactions, a valuable lesson for the world of today.

But things are shifting! Focusing on the human part of the equation is becoming the key to current trends. Look at the success of Pokemon Go or Snapchat. These are pieces of technology that have been explosively successful, but that are driven by bringing people together in the real world, as well as the virtual.

3. Tech and innovation are separate from profit

One unimaginable aspect of Star Trek utopia is the elimination of money. That’s not to say that capitalism can’t be okay (that’s another discussion), but advances in technology don’t have to be driven by profits.

The internet was pioneered in the US military – outside of the realm of profits. Look at the great things that have come from open source Tesla car innovations of Elon Musk. Without profits to drive innovation, Star Trek’s universe allows for the development of the best technology. The greatest minds work for the good of the community rather than for the good of their bank accounts.

4. Tech is valued, not thrown away for the latest upgrade

There’s this synergistic relationship with technology on Star Trek, from the very beginning. Why doesn’t Captain Kirk ever settle down and get married? Because he’s married to the Enterprise, something that’s actually referenced early on. That sense of respect and mutual need drives Star Trek, but doesn’t exist today.

We lose something with the disposable nature of our technology. There isn’t a new model of the Enterprise every year, the ships are loved and repaired and upgraded until they’re finally destroyed in spectacular fashion. We’re missing that human bond with tech.

For businesses, that can be a valuable lesson about taking advantage of the latest technology without throwing out the old.

5. The philosophy of a technological Utopia

There is a philosophy behind Star Trek that we have lost today. Gene Roddenberry, its creator and mastermind, saw the technology as a way to make humanity more than it is today.

There is something incredibly shortsighted about the way that we’re chasing trends and topics. The crew of the Enterprise consistently saw the big picture of their missions, even their small, personal actions. That understanding of an overarching goal is something that we are desperately missing as technology runs away with us. It’s something that business can benefit from – looking toward their wider impact rather than getting lost in the allure of technology.

Pop culture consistently comes back to the futuristic but grounded worldview of Star Trek. 2016 marks the fiftieth anniversary of boldly going where no one has gone before, and the franchise is as strong as ever. In that time we’ve seen some dramatic changes in the way that humans and technology interact. Yet as far as we’ve come, we still have a lot to learn from Captain Kirk and his crew.