What Political Campaigns Teach Us About Personal Branding 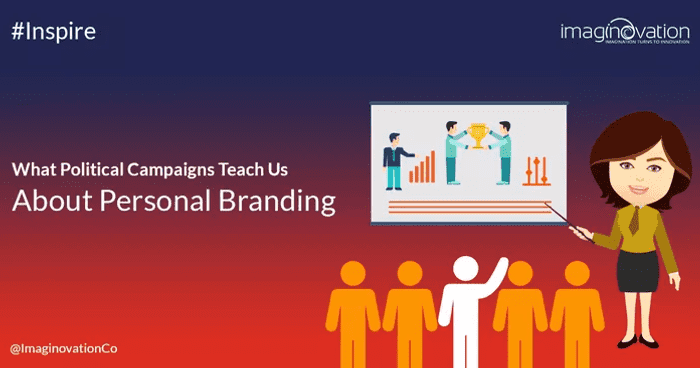 Let us bring you in on a little secret – it’s an American election year. While it seems like this incredible event that takes over the country every four years is completely disconnected from the business of being in business, there’s a lot that we can learn from politicians when it comes to personal branding.

Personal branding is the process of establishing who you are to the world. Obviously it centers around a single person, though that person can of course lend their name and credit to products and businesses. In fact, well developed personal brands often develop into businesses unto themselves. Personal branding involves working diligently to control the image that’s projected to a specific audience, shaping their views and understanding as much as possible.

If there’s any arena in American society that has it going on with regards to personal branding, it’s politics – the product that politicians are selling is always themselves. Here’s what we can learn from them and their political campaigns:

What people believe is what matters. It completely immaterial that your product is the best solution for a given problem if no one believes that it works. Initial perception is far more powerful than anything that follows, so putting your best face forward at the outset is your best chance to control the perceptions that follow.

Politicians constantly spin information, jockeying for the best position in order to poll higher than their opponents. That spin goes into overdrive when negative information hits the public. This is absolutely critical for public figures and businesses to understand, because the resources often aren’t there to combat negative perceptions. Once a negative perception is out there, it can be difficult to reverse even with unlimited resources.

What’s your story? Who tells it? Politicians who breeze through election season are in control of their story, and the story of their rivals.

How can you be in control of the narrative? By being proactive. Don’t ignore known problems, even if you know they’re going to have a negative impact. The politician who stands up and admits their misdeeds is able to capitalize on the media attention, have power on that first perception and control the spin on the issue before competitors.

This especially true for social media. Whether it’s a picture of you with a respected mentor or a note about your alma mater, put it out there for the world to see. Politicians are completely out front with what they’ve done for themselves, their constituents, their state, their country, the world, the universe and every other alternate reality. While there’s an exaggeration to the bravado and upfront nature of politics, the core idea that you should tout yourself is truly worth noting.

Filter out the best of your accomplishments and include them in your personal branding. Don’t limit yourself to professional accomplishments. Include obstacles that you have overcome as well. Politicians share their stories of triumph, with even seemingly small and mundane accomplishments being celebrated. The more that you’re able to mold and promote your accomplishments, the more you’ll be able to leverage the hard work and ingenuity that led you to achieve them in the first place.

Sharing your accomplishments isn’t the same as patting yourself on the back, think of it instead as being a savvy self-advocate and taking control of the perception that others have of you.

You are judged by the company you keep. If you surround yourself with individuals who don’t exhibit the same level of accomplishment and integrity that you do, then you’re going to be pulled down to their level in the eyes of the public.

How often have political candidates been sunk because they choose the wrong associates? Whether it be a presidential candidate choosing the wrong running mate or endorsements that come from negative sources, politicians are openly vulnerable to the problems that come with unsavory consorts. The wrong move can spell serious trouble for a candidate, driving them to work to make the best possible connections.

Be open in the connections that you pursue. Unlike modern political candidates, you’re not limited by a party system that keeps you from reaching out. Personal branding, like politics, is all about connections. Be conscious of the ones that you’re making.

Understand your level of control

How much control do you really have over your public persona? While there’s a great deal of control that you can have over the way that you present yourself, there is a limit to the amount of control you might be perceived. That’s because it’s not just you in this – it’s you and your audience.

If there’s anything that we can learn from political candidates in terms of personal branding, it’s that we do not have a holistic level of control over the way that we’re perceived. Other people are going to step in with their own biased commentary. The key to the whole process is to be you and to be honest. Maintain your integrity at all costs and be conscious that you’re living your truth through your personal branding. If you are what you project, then there should not a pervading fear that you’re going to be somehow found out. We’ve all witnessed the downfall of politicians when it comes to light that they are not what they purport to be. Take this as a lesson. Personal branding can spin out into that same problem if it’s not done with sincerity.

Personal branding is oddly intimate, inviting scrutiny that is strikingly similar to what politicians experience. Political season offers a fruitful time for insight into what works and what doesn’t work.
What lessons have you learned about personal branding from politicians? Which politicians do you feel have done a good job of controlling their public perception? Leave a comment and let us know!