What’s the Role of Luck in Business Success? 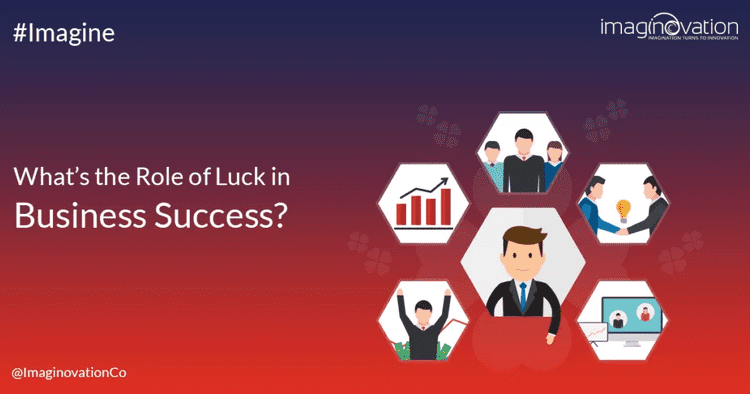 Though we all have a certain amount of control in our businesses, the reality is that success can be a matter of luck. Hard work matters, but when you look at the whole picture, it becomes pretty clear that luck is a major factor in business – doesn’t it?

“To be successful, you have to be out there; you have to hit the ground running. And if you have a good team around you – and more than a fair share of luck – you might make something happen.” – Sir Richard Branson

The economy doesn’t always work for businesses. During up times, it can seem like everyone is making money. During a downturn, it can feel like everyone is going bust. There’s just no way to know when an economic event is going to take the wind out of your sails. Few expert economists saw the 2008 meltdown before it was upon us, even though looking back there were plenty of warning signs. Nor did anyone see the 9/11 attack coming, an event that sent the world into economic turmoil and cost many small businesses their livelihoods. Even Walt Disney nearly lost his studio thanks to the frenzy of World War II. At some point, there is just a numbers game at play here and businesses that are successful happen to be those that are lucky enough to be ripe for business during peak economic times, something that’s impossible to predict with a great deal of clarity.

How to take the luck out of economic conditions

Smart businesses prepare for the worst and the best. Having a solid economic foundation will allow you to seize opportunities during positive economic conditions. It will also allow you to weather the storm during negative economic times. There’s been enough turmoil in the economy in the last twenty years that you can be sure that whatever is on the horizon, it’s not going to be what you expect. So plan for a wide range of possibilities, luck or no luck.

Is the world ready for your next innovation? Many times we’ve seen that what happens is that a visionary comes onto the scene at just the right moment and it can only be attributed to luck. Their audience was tailor made for their product. Take Paypal. This was a service that was developed at the perfect time for the company to take advantage of people being willing to trust the internet with financial transactions. As technology and security grew, Paypal was in the perfect position to take advantage of online spending. The audience was ripe for the picking.

How to take the luck of out a ready audience

The chance meeting of two individuals who go on to create an incredible business is almost a cliché. Take Steve Jobs and Steve Wozniak, the powerhouses that founded Apple. These two men met by chance thanks to a summer job at HP when they were in college. Had they been placed in different departments or one of them chosen a different summer job, then you wouldn’t be holding an iPhone. The magic of finding the right team is in many cases a wholly lucky endeavor.

How to take the luck out of finding magic team members

Be open to looking in places that you wouldn’t expect to find amazing employees or business partners. Don’t be shy about asking people that you gel with if they’re interested in working with you, even if they’ve already got a job. This greatly increases your chances of finding the spark that could lead you to business success.

In today’s world of viral internet sensations creating seismic success for some businesses, there’s a good deal of luck that goes into play. A great example is the case of Korean expert Robert Kelly who recently became mega famous when his young children wandered into a live home interview on the BBC. There was no way to predict that kind of event, or the viral explosion that came after. The ALS Ice Bucket Challenge is a textbook example of an internet marketing campaign that took off like gangbusters. There was no way to foresee that the fundraiser would raise over $100 million and become a cultural touchstone. Most of the mega successes in internet viral marketing have come because of sheer coincidence, sheer luck.

How to take the luck out of going viral

Though the mega successes that have happened in internet viral marketing have perhaps been by chance, that doesn’t mean that you should give up. Suppose the ALS Association had never come up with the ice bucket challenge? One way to be sure that you’ll never have a viral internet sensation is not to try.

Be ready to take advantage of luck

“Luck is what happens when preparation meets opportunity” – Seneca

The other thing that can happen is that businesses aren’t open to new ideas, and so what can be a lucky break for one business is just another day for others. Don’t miss out on what could be the best decision of your professional life because you’re boxing in what you think success should look like! Find luck wherever it is, in whatever form it takes.

The role of luck in business is most definitely visible. The question is whether businesses define luck as a determining factor in their success.

Are you prepared for the next opportunity that comes your way? Be ready with an updated website or a custom mobile app. Contact us – we’d love to help your business!

Be ready to take advantage of luck