Why Passwords System and Their Rules are Dead (Outdated and Inaccurate) 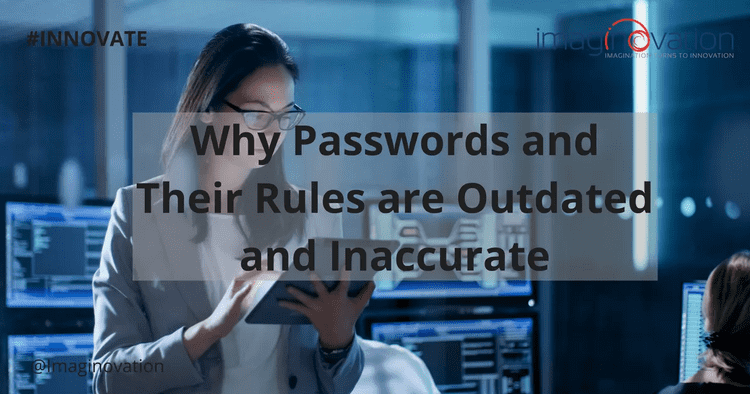 People don’t think twice about typing in their password, except to grumble about them. You’ve got dozens to remember, each website has different rules about length and characters, and it’s easy to mistype them. Plus, thanks to [keylogging](https://www.imaginovation.net/blog/computer-security-day-what-is-keylogging/) and other hacker tricks, passwords might not be that useful anyway.

How did we get here, and what are the alternatives & the future of authentication?

Passwords have been used since at least the time of the Romans, though likely earlier than that. The first computer password is credited to engineers at MIT in the 1960s, who shared multiple terminals and needed to log in to access their private files. Password security wasn’t that great then, either. One user found and printed the passwords, sharing them with others.

Encryption works by relying on an algorithm to turn your plaintext password into random characters (ciphertext). To read it, you need a particular key to decipher the code. There are two types of encryption, public and private, but both accomplish the same thing.

Many things have changed online since 1997, making our password system obsolete.

On top of those problems, the rules governing passwords are obsolete. Even if you follow the rules for creating a “strong” password, it might still be hackable. For example, you could take your name and sub out characters, like this: J0hnSm1th. But most people know that the letter “o” is a zero, and an exclamation point or number one is substituted for the letter “I.” As hacking programs improve, they will figure that out, too. Instead, all we’ve done is made the password database happy by following its rules.

In fact, the guy who suggested this format for passwords apologized in 2017.

NIST recommends passcode phrases because they are long and easier to remember than a random mix of numbers, symbols, and letters. They also suggest we restrict users from creating passwords that meet the following:

The Future of Authentication

People seem to realize passwords aren’t sufficient. According to the Digital Consumer Survey by Accenture, 60 percent of people in 24 countries say they find passwords cumbersome. About 46 percent feel confident that their personal data is secure.

Many websites now use two-factor authentication. That means users type in a username and password but also something else. That may be a piece of information only they know, or a code sent to the user’s cell phone, though hackers are already finding ways to discover that SMS by intercepting calls and text messages.

Fingerprints are now becoming a more common secondary login tool, as are PINs. Iris scans are another option, though less common because additional equipment is needed. Some programs can determine if it’s the correct user by the way the person types, walks, or holds the phone, and, of course, Apple is using face recognition to lock its new phones.

But the password part of the two-part process may disappear altogether. Microsoft released a new app called Microsoft Authenticator, takes away the password part and relies on you having your cell phone to log in. The security risk is that someone can hack into a user’s account as long as they possess that person’s smartphone.

However, it may be more secure than a weak password overall.

Plenty has been written predicting the death of the password, but we are still using them. Cost, as usual, is holding companies back from making these changes. But as more data breaches hit the news, the password may finally D1$$apear.

Talk to us about making your site more secure.

The Future of Authentication