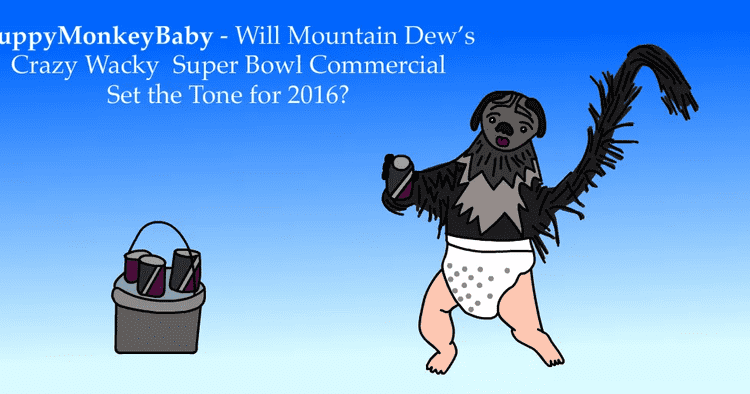 What do you get when you cross a pug, a monkey, and a human baby?

Sunday’s Super Bowl 50 was a heart-breaking affair for Panthers fans like me. But much as I hated the result, the event did make a mark on the business owner in me as far as inspired advertising goes. To be more precise, one advertisement did. Most of the advertising was straightforward and sedate, with clichéd commercials going about in a predictable fashion. One company, however, stood out from the rest.

It was a moment 16 years in the making. Mountain Dew made the most of it by packing in a weird creature, pulled straight from someone’s twisted imagination: one part monkey, one part puppy, and one part human baby. (Three good things in one, they said, as the company launched new flavors of its drink.)

A Mountain Dew rep told ABC that the commercial “stars a quirky, albeit endearing character that is also comprised of three awesome things fans love in a Super Bowl commercial – a puppy, a monkey and a baby.” I don’t know about endearing, but agree with the rest!

Certainly an unusual way to stand out and make a point when all eyes are on you and you want to ace the coveted 30-second slot.

Big bucks are not enough at the Super Bowl. With more than 114 million viewers tuning in for the Super Bowl last year, making it the American television’s most-watched event, expectations were of an even higher viewership for the Super Bowl this year. (We are awaiting the latest figures.)

A total of 46 advertisers took the stage, and some of them delivered memorable ads (though that is a subjective interpretation). However, there was a lot of same old about most of them, which is not surprising with a 30-second airtime going for $5 million on CBS. Why risk it with weirdness, yeah?

The folks at Mountain Dew thought, why not? That is exactly what makes their ad so noteworthy!

The psychedelic commercial started trending soon after its debut on February 3.

At the time of writing, the officially uploaded video of the commercial on YouTube had more than 9 million views. Garnered over the course of less than four full days. The only other commercial that raked in a higher viewership was the Hyundai First Date ad.

We marketers and advertisers know how difficult it is to capture people’s attention. It’s even more difficult to linger on in their minds. Mountain Dew showed us how to do it in an apparently saturated and super-competitive market.

Is this, however, going to set the tone for the kind of commercials we can expect to watch in 2016?

We are inclined to believe, yes.

It’s a breath of fresh air in the sea of boring American commercials. It’s unlike what we are used to seeing on television.

It has shock value, some might even call it stupid, but obviously the Millennials are loving it. To put it simply, it was NOT what we expected.

Given the extent to which it has captured the young public’s imagination, I think the ad itself will start trends and Internet memes. We can expect to see a lot more of mishmash of animals springing up out of nowhere on big game nights. As the Internet community has fun with it, an endless number of spoof videos are on the horizon.

Kudos to the Mountain Dew creative team. It’s a memorable ad, and will be talked for a long time to come.

On the whole, the Super Bowl 50 was a forgettable affair. We are heartbroken that the Carolina Panthers lost.

Personal sorrow aside, even from a commercial perspective I didn’t find the event hot. The Hyundai First date ad, which seems to be the most popular one going by the numbers, came a close second for me in terms of sheer creativity. The singing sheep and the talking Border Collie in this Honda commercial got a chuckle out of me, too, but I know neither will stick around in my mind for long.

The freakish creature in diapers, on the other hand, will.

What did you think of the #puppymonkeybaby ad?

Did you find the creature cute, or did it scare you? Is nightmarish the word?

As digital marketing people who are used to the struggles of creating imaginative content, which commercial stood out to you and what did you learn from it? Did it inspire any new ideas for you?